In the Capitol on Zoom

In the Capitol on Zoom
Print 🖨 PDF 📄 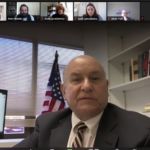 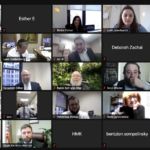 Navigating the mute and video buttons on Zoom, rather than the halls of the Capitol Building in Albany, was a new experience for those participating in the third and final installment of the Agudah’s  virtual Albany Day series on Tuesday, with meetings focusing on the Hudson Valley, encompassing Westchester, Rockland, Orange and Sullivan Counties.

Yesterday’s virtual Albany Day, conducted by the Agudah over Zoom, had Hudson Valley legislators meet with their constituents and community activists to discuss the issues that matter to them. One such issue was the Orthodox community’s deep concern regarding the dangerous inflammatory public rhetoric emanating from opponents of the East Ramapo School Board who falsely accuse the Board – consisting primarily of Orthodox Jewish members – of ‘Jim Crow’ style racial animus.

Another issue discussed with legislators was a budget cut and a change in the language of New York State law regarding Mandated Services Aid (MSA) in this year’s executive budget. MSA is a law that was passed in the mid 1970’s that allocated funds to reimburse nonpublic schools in New York State for services that schools are mandated to provide by the State. The proposed change in language would enable future budgetary cuts to reduce the allocation of funds to nonpublic schools. Other issues discussed included substantial equivalency, busing cost reimbursements, immunization recordkeeping reimbursements, and STEM funding.

Though the formal group Albany Days have concluded, Agudah staff and activists will be continuing to advocate with legislators and their staff following up on the issues discussed up until the final budget is adopted at the end of March.

“The pandemic canceled a lot over the past year, but the need for advocacy has only grown. That is why it is extremely important that we meet with our legislators to discuss important issues facing the community. Holding Albany Day over Zoom was a unique challenge and a new experience for us, but the legislators were just as engaged and involved as if we were meeting in person in Albany. We thank them and their staff for making themselves available and look forward to continuing our relationships with them and I hope by the time it comes around to next year’s meetings, we will be able to meet in the Capitol in Albany,” Rabbi Yeruchim Silber, Agudah’s director of New York government relations, said.