It ain’t over until…

It ain’t over until… 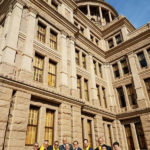 While many state legislatures are winding down across the country, or have already adjourned, states allow the governor or legislature to call a special session to address specific topics.

Agudath Israel and other school choice advocates were excited by the announcement of a special session in Texas which will begin July 18th. We were encouraged by Governor Greg Abbott’s inclusion of “school choice for special needs students” in his list of priorities for the session, and excited that he has been speaking out in the last few days just how important it is to him. Several school choice bills failed to pass in the House during the regular session, but we are hopeful that legislators can come together and finally pass a private school choice bill in Texas. While the Legislature would need to introduce a new bill for the special session, Governor Abbott highlighted an education savings account (ESA) proposal, HB 1335, as a model to follow. I had the opportunity to thank Governor Abbott for his support of school choice back in January when he attend our school choice rally in Austin.

In Nevada, on the other hand, legislators left Carson City this week without a funding solution to the state’s ESA program leaving more than 10,000 applicants empty handed. The original ESA program was passed in 2015, but the funding method was struck down by the courts. Governor Sandoval promised $60 million at the beginning of the 2017 session, but in the waning hours of session, the ESA funding was scrapped and instead, legislators voted unanimously to add $20 million to the existing scholarship tax credit program. The tax credit program has helped students attend  Jewish and other nonpublic schools, and has some distinct advantages over the ESA, but it lacks the nearly-universal eligibility and flexibility of the ESA. Representatives of the Orthodox Jewish community in Nevada, who attended nearly every committee hearing and meeting in support of the ESA, were grateful for the increase in the tax credit program, but disappointed with the failure  to fund the savings accounts.

Mazel tov to my colleague Rabbi Ariel Sadwin and his entire family on the Bar Mitzvah of his son and to Rabbi Abba Cohen and his family on the recent engagement of his daughter.