Agudath Israel of America’s annual mission to Albany is advocacy at its best. Organized by Rabbi Yeruchim Silber, Agudah’s Director of New York Government Relations, Albany Day connects legislators and their constituents advocating on important issues facing them and the entire Orthodox community

Attendees come from all over New York and include activists, community leaders, school administrators, and concerned parents.

This year instead of one large Albany Day, Agudah focused on regional lobby days connecting activists from particular areas with their local representatives. The first, on February 4, was a 15 person group from the Monsey and Hudson Valley region. The second was a 22 person group from Long Island, Far Rockaway, and the Five Towns on February 11. The immediate advantages were obvious. Each group concentrated on its local issues and the smaller group size allowed each participant to personally interact with the elected officials.

The members of the mission were now more focused, more convincing, and more engaged. The two Albany Days were more effective than ever.

The biggest issue on the agenda, in light of the recent spate of anti-Semitic attacks, was security. The New York State Legislature currently allocates $15 million annually to nonpublic K-12 schools through the Nonpublic School Safety Equipment (NPSE) Grant. That’s approximately $37 per child. Thanks to the lobbying of Agudah and others, NPSE includes reimbursement for a wide array of security upgrades and safety and health items.

In early 2019, New Jersey increased its allocation to $150 per child for security – double its previous rate. Assemblymembers Daniel Rosenthal and Stacey Pheffer Amato have proposed that New York now double its allocation to $30 million in the current budget. On Albany Day, the mission members met with legislators to express their support for this allocation, describing their community’s very real security fears.

Among the officials that they met were:

Just one week later,Silber brought his second group to Albany. This latter group was formed in partnership with the new Long Island Yeshiva Advocacy Coalition. There were 22 delegates from Long Island, Far Rockaway, and Nassau County, including administrators, parents, and board members, representing 23 schools and ten thousand students from the area.

The Long Island Yeshiva Advocacy Coalition is, in and of itself, a success story of lay leaders working together with the support of Agudath Israel. A few years ago, Rabbi Ari Ginian, Executive Director of Yeshiva Ketana of Long Island, started a WhatsApp group for local yeshiva executive directors. They helped each other with referrals, advice, and professional development.

When Agudah reached out in preparation for Albany Day, Rabbi Ginian realized the yeshivos could take what they were doing on a local level and magnify it. After all, the yeshivos are serving the same families and lobbying the government for the same issues. With a united voice, they could help set the agenda and create change.

Together, the yeshivos realized there were over 500 students denied busing from areas like Far Rockaway in New York City to schools in the Five Towns, just a few blocks away.

In Albany, the group received a special greeting on the floor of the Assembly chamber. After being introduced by Majority Leader Crystal Peoples-Stokes they were warmly greeted by Speaker Pro Tempore Jeff Aubry who welcomed the group on behalf of Assemblymembers Stacey Pheffer Amato, Daniel Rosenthal, and Simcha Eichenstein. Among the officials that they met were:

Once again, Rabbi Silber saw the increased energy, camaraderie, and effectiveness of the local, focused group. Rabbi Ginian was very pleased, too. “The politicians have a positive outlook on the issues we bring to them,” he reflected. “They see that we’re thought out. We walked away confident that the lawmakers will look into our concerns and make changes.”

“The delegates on both of our days were totally focused and involved” said Rabbi Silber. “And that was obvious in the responsiveness we saw on the part of the lawmakers. We at Agudah were thrilled to be able to facilitate these important lobby days and look forward to more of these in the future.” 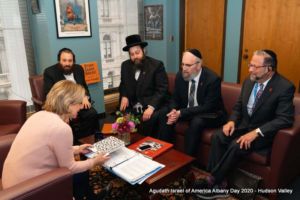 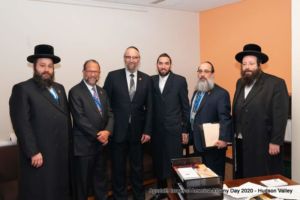 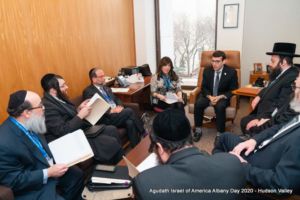 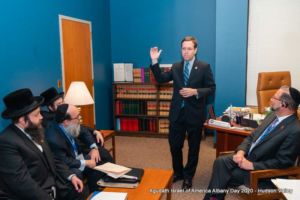 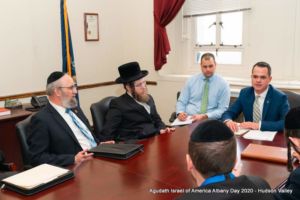 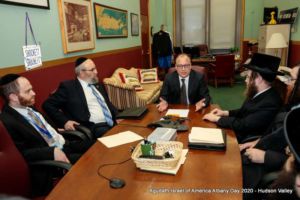 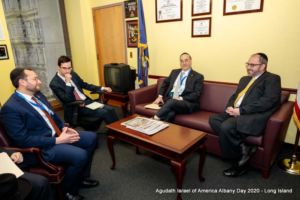 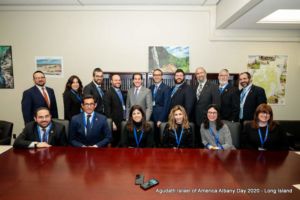 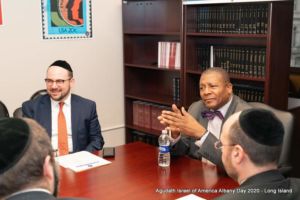 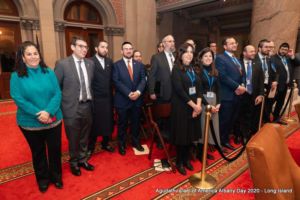 Being welcomed on the floor of the NYS Assembly by Assemblymembers Stacey Pheffer-Amato, Daniel Rosenthal and Simcha Eichenstein 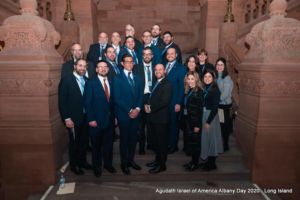 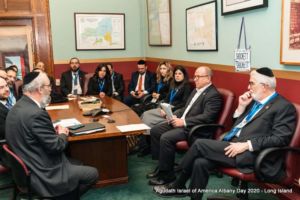