On Tuesday, December 13, Maryland Governor Larry Hogan came to Baltimore to join the Jewish day school community in celebrating the success of the new BOOST scholarship program. The event, held at Bais Yaakov High School, drew a crowd of close to 700 people, comprised of students from several schools, and administrators and lay leaders from all nine of the Jewish schools that participated in the BOOST program.

The BOOST (Broadening Options and Opportunities for Students Today) Program was passed during the 2016 legislative session and funded by a $5 million allocation in the governor’s budget. While close to 5,000 applications were received by the state, only about 3,000 met all of the eligibility criteria. In the end, more than 700 students wishing to attend Jewish day schools received scholarships totaling over $1 million.

Arriving at Bais Yaakov’s Mount Washington campus, Governor Hogan was greeted outside by a sea of hundreds of students. He was visibly moved by the warm greeting, commenting later that he had never experienced anything like it.

After making a stop in an American History classroom, Governor Hogan proceeded to the auditorium where a large and excited crowd awaited him. Rabbi Yechezkel Zweig, principal of Bais Yaakov High School welcomed the Governor and then introduced Rabbi Ariel Sadwin, director of Agudath Israel of Maryland and president of Maryland CAPE (Council for American Private Education), who served as the program’s emcee.

Rabbi Sadwin gave a brief history of the nine years of advocacy efforts led by Agudath Israel and its coalition partners (the Maryland Catholic Conference, the Baltimore Jewish Council, the Association of Christian School International, the JCRC of Greater Washington, and the Orthodox Union) to enact legislation that would provide some relief to those families struggling to afford private school tuition. He spoke about his first encounters with then-businessman Larry Hogan in 2014 and commended the heroic efforts of the staff of the Maryland State Department of Education to implement the program in time for the beginning of the current school year.

Later, students from Cheder Chabad, Bnos Yisroel, and Bais Yaakov delivered heartfelt presentations, expressing their deep appreciation to the governor. Rabbi Michoel Berkowitz, a teacher at Talmudical Academy shared how BOOST provided struggling families with hope and opportunities they otherwise would not have. 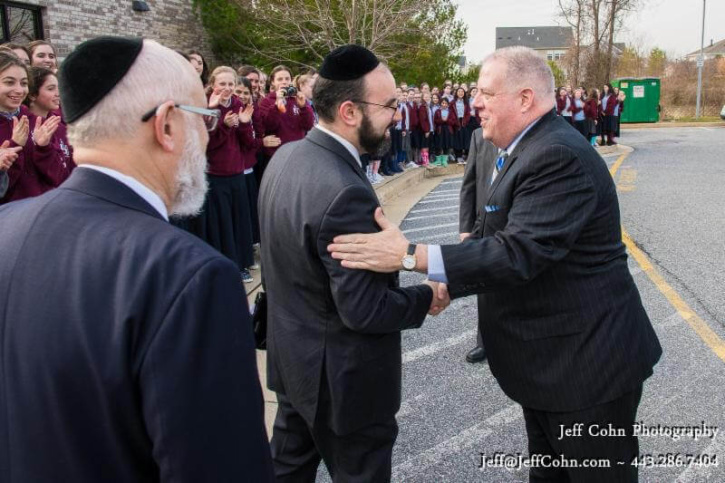 Rabbi Sadwin then called upon Mrs. Elizabeth Green, esq., vice president of Bnos Yisroel, executive board member of Baltimore Jewish Council, and BOOST advisory board member, to introduce the Governor. As one of the two appointees to the advisory board made by Governor Hogan, Mrs. Green expressed her appreciation for being given the opportunity to play a role in the BOOST program.

The Governor opened his remarks by sharing how overwhelmed he was by the reception and how the event brought him to the verge of tears. He spoke about the closeness he feels to the Jewish community and how his recent trip to Israel to promote Maryland-Israel business interests was so meaningful. He then surprised the crowd by publicly announcing that he will be increasing the budget allocation for the BOOST program from $5 million up to $10 million over the next three years. The response from the crowd was deafening as they all stood and cheered at the news of the increased funding. The Governor concluded his remarks by wishing all of the students continued success in their studies and extending warm pre-Chanukah wishes.