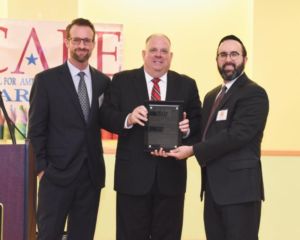 On Tuesday, Maryland CAPE (Council for American Private Education), presented Governor Larry Hogan with its 2017 Champion of Education Award. Together with the three previous recipients, the awardees represent a bipartisan group of elected officials committed to providing the best educational options for all of Maryland’s school children. The award ceremony took place at Saint Ambrose Catholic School in Prince George’s County where the governor attended school as a child.

“Education is – and will continue to be – the number one priority of our administration,” said Governor 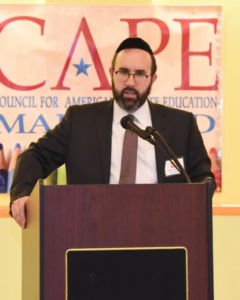 Hogan. “We remain committed to encouraging and supporting innovative ideas that give parents expanded options to prepare children for higher education and for the jobs of the future. I am grateful to receive this incredible honor.”

Agudath Israel’s Rabbi Ariel Sadwin, President of Maryland CAPE, commented, “it was a true honor to present this award in recognition of Governor Hogan’s dedication to the educational success of all of Maryland’s children”.

The event also featured the presentation of the 2017 Civic Achievement Awards to Ms. Barbara Bice and Mr. Jim Clark, two recently-retired employees of the Maryland State Department of Education, who worked for many years on programs that were beneficial to Maryland’s nonpublic schools.

Maryland CAPE is a coalition which represents the state’s nearly 1400 private schools.