See the recording of the azkarah below. 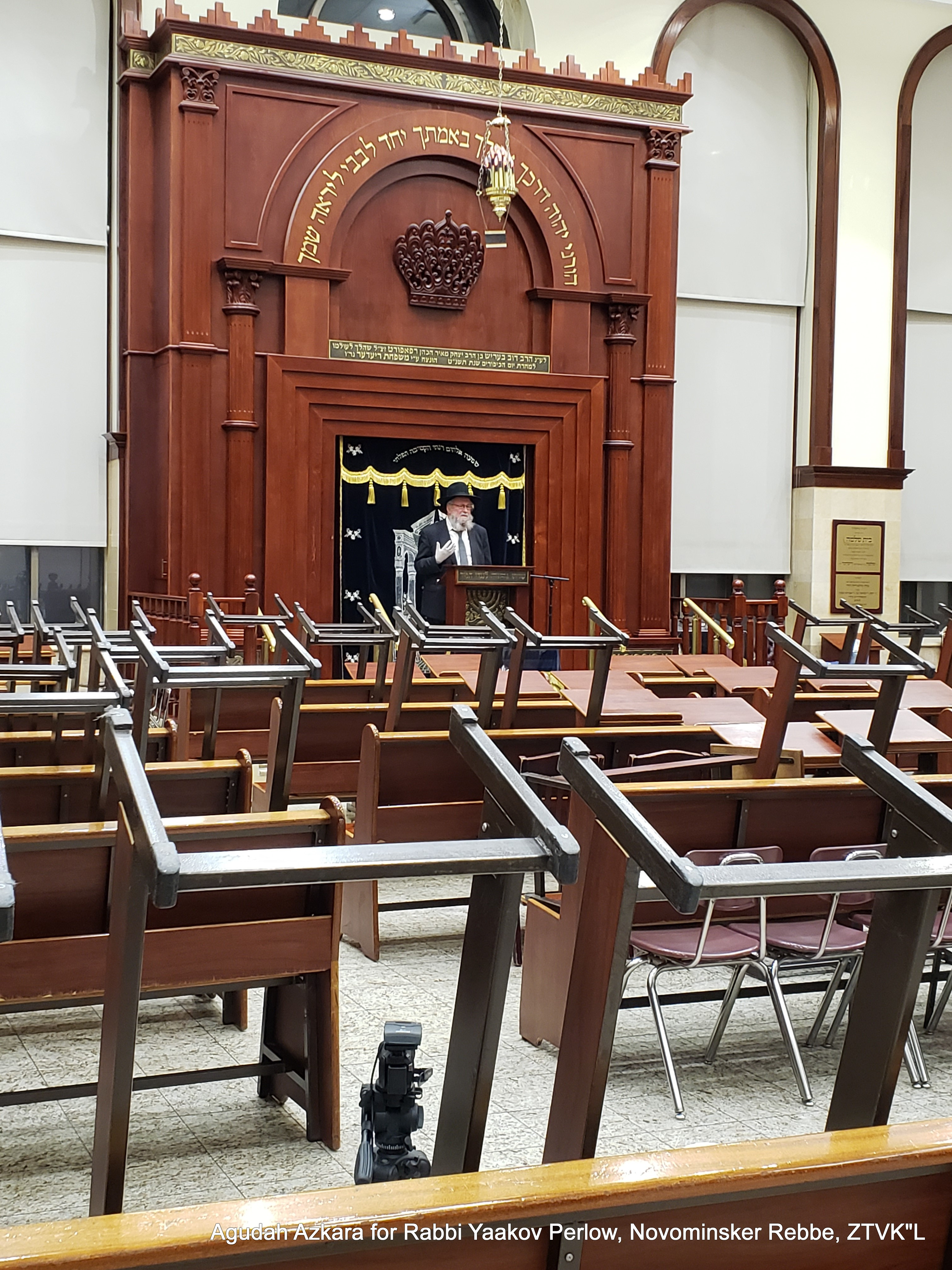 As Klal Yisroel continues to mourn the loss of the Novominsker Rebbe, Rabbi Yaakov Perlow ztvk’l, Rosh Agudas Yisroel, chaverim of the Moetzes Gedolei HaTorah and family members offered deeply emotional divrei hesped for a leader who was a major guiding force for Torah Jewry in America for decades.

With state and local laws still in effect prohibiting public gatherings, maspidim addressed an empty beis medrash at Yeshivas Novominsk, an audience of nearly 60,000 listening through teleconference and livestream as the Novominsker was remembered as Klal Yisroel’s Rebbe. Normally echoing with exuberant sounds of talmidim learning Torah, the yeshiva’s stark emptiness was yet another painful reminder of the present eis tzarah that has devastated our community. 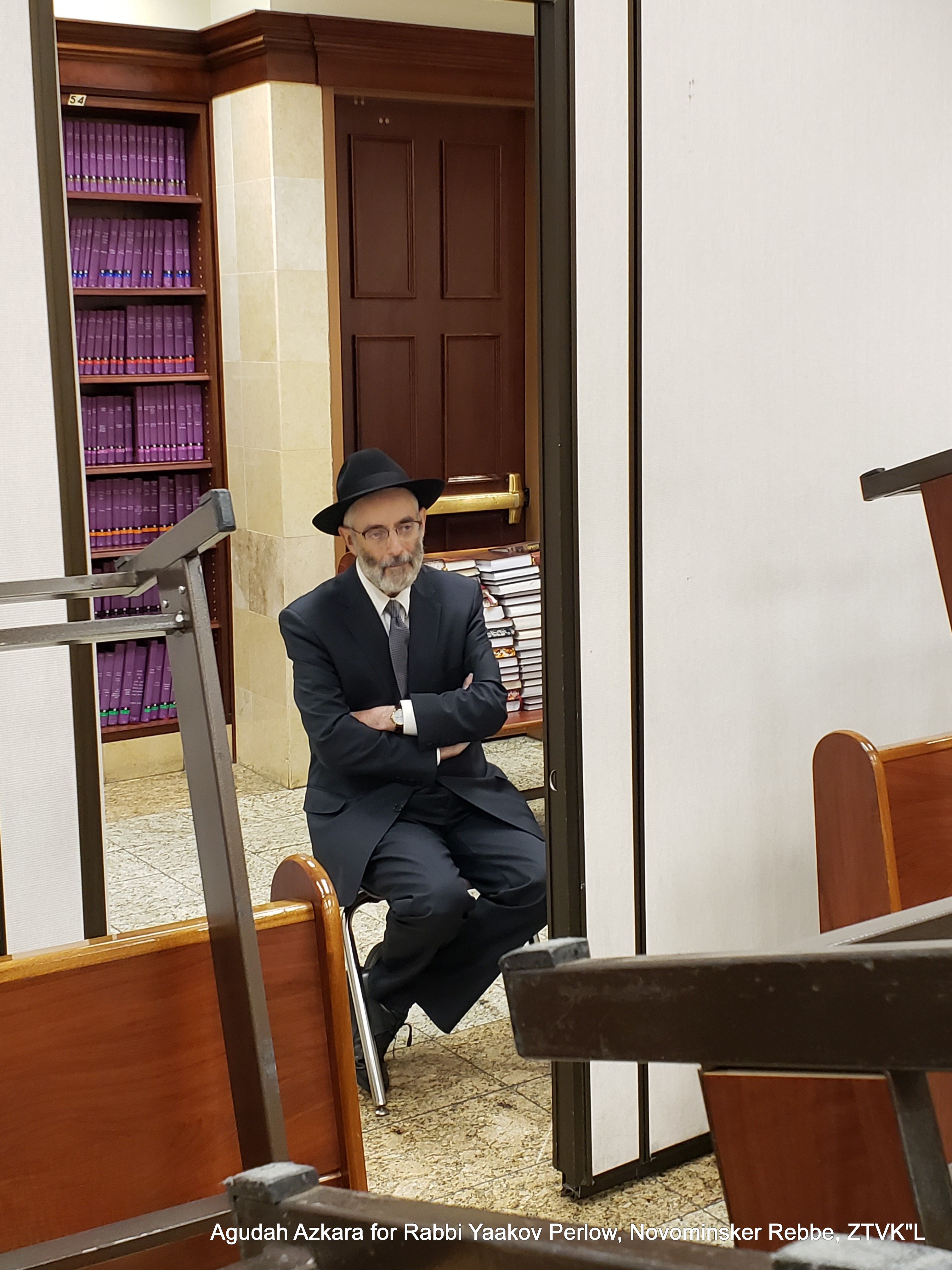 Rabbi Zwiebel waiting at a safe social distance while others were speaking.

Throughout the over two hour-long azkarah, Rabbi Perlow was lauded for his unwavering devotion to Klal Yisroel, somehow stretching the hours of each day so that he could immerse himself in his learning and still give his undivided attention to the many organizations and individuals who sought his guidance. In a pre-recorded segment, Rabbi Shmuel Kamenetsky, Rosh HaYeshiva, Talmudical Yeshiva of Philadelphia, described the Rebbe as a “yochid b’yisroel” who cared so deeply for others that their needs became his. No communal issue was deemed too large, too small, or beyond the Novominsker’s realm of expertise, his sage counsel steering Klal Yisroel through turbulent waters when communal institutions such as bris milah, shechitah and yeshiva curriculums were threatened by public officials.

Whether it was helping someone who came to him for guidance, being mechazeik  those in chinuch, dealing with the dangers of technology, or perpetuating the memories of those who died during World War II, the Novominsker was involved in every facet of communal life, recalled son Rabbi Yehoshua Perlow, who was named as the mimaleh makom together with his brother Rabbi Yisroel Perlow.

Even in his youth, it was clear that the Novominsker was destined for greatness in the Torah world.  The Rebbe’s chavrusa from his yeshiva days, Rabbi Aharon Feldman, Rosh HaYeshiva, Yeshivas Ner Yisroel, Baltimore, observed that the Novominsker’s incisive mind, knowledge of Torah, chazal, halachah and agadah, all-encompassing kavod haTorah and ability to make decisions with far reaching consequences propelled him to the highest heights as a leader in the olam haTorah. Son-in-law Rabbi Elisha Horowitz, Rav of Khal Agudas Achim, Lawrence, observed that the Rebbe drew on seemingly endless wellsprings of Torah that provided him with phenomenal clarity on yiddishe values, using that knowledge as he guided his own kehillah, as well as organizations, mosdos, families, individuals, and bochurim of all ages with tremendous joy and incredible sensitivity.

A marbitz Torah for more than 60 years who was deeply involved in tzorchei tzibbur for four decades, and served as Rosh Agudas Yisroel for 22 years, the Novominsker attained crowns of Torah, kehunah, malchus, and shem tov through generations of leadership and a lifetime of avodas Hashem, observed Rabbi Elya Brudny, Rosh Yeshiva, Mir Yeshiva, Brooklyn. Speaking in Yiddish, Rabbi Yosef Frankel, the Vyelipoler Rebbe, extolled Rabbi Perlow for his unparalleled ahavas Yisroel. Quoting the Rambam’s dictum that a melech b’Yisroel’s heart pumps blood to keep all of Klal Yisroel alive, Rabbi Frankel said that we have lost both our king and the heart that cared for us and sustained us, irrevocably altering the face of American Jewry.

Several of the maspidim spoke of the Novominsker’s passion for the Agudah, with Rabbi Yehoshua Perlow saying that his father regarded the Agudah as a “heilige zach,” the annual convention filling him with emotion as he saw how it unified shivtei Yisroel and inspired them to grow in their avodas Hashem. Rabbi Feldman recalled that the Novominsker’s speech each year at the Agudah dinner served as the State of the Union address for Orthodox Jewry, every heartfelt word expressed clearly and articulately, often delivered without notes. 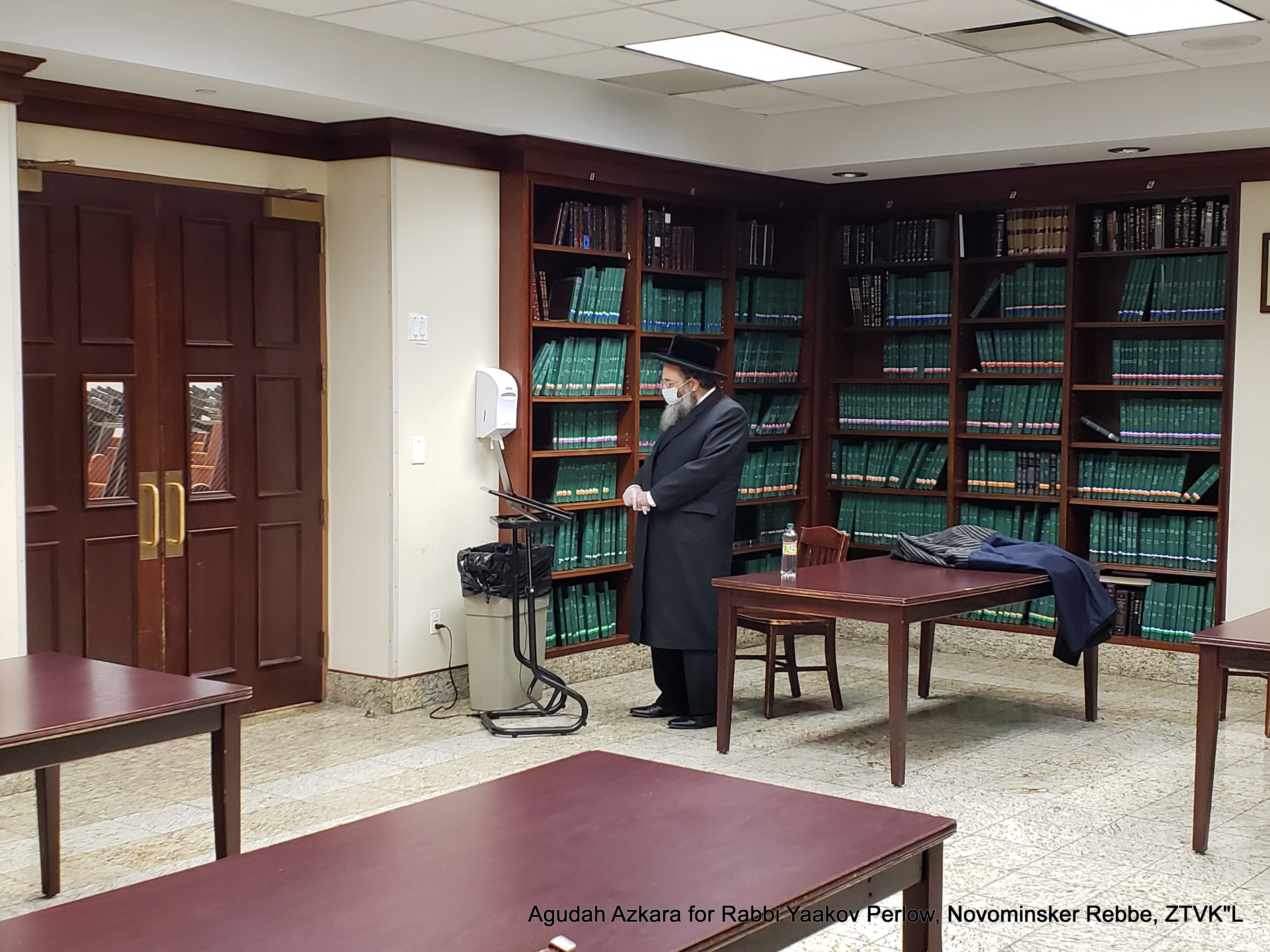 The circumstances of the Novominsker’s petirah that dictated a levayah for immediate family only was heartbreaking for his innumerable followers, who were left unexpectedly bereft and denied the opportunity to give their rebbe kavod acharon.   Rabbi Chaim Dovid Zwiebel, executive vice president of Agudas Yisroel, observed that the sparse attendance provided yet another opportunity for the Rebbe to facilitate a kiddush Hashem b’rabim and was in keeping with his insistence on avoiding kavod in this world. Rabbi Feldman described the Novominsker’s passing as a tragedy for both American and world Jewry, noting that the pain of losing a tzadik exceeds even that of the churban Bais Hamikdash, the heartache renewing itself daily instead of gradually fading away.

Tears flowed freely throughout the azkarah, with Rabbi Frankel calling out, “Rebbe, don’t forget us,” as he asked the Novominsker to be a meilitz yosher for a mageifah-stricken Klal Yisroel. In a heartfelt plea, Rabbi Brudny urged the Novominsker to “go to the kisei hakavod, your Klal Yisroel is tzibrochen … be omed and mishamesh l’maalah like you were omed and mishamesh l’matah.”

Summing up the depth of emotion enveloping Klal Yisroel and pledging to perpetuate the Rebbe’s legacy, Rabbi Zwiebel spoke passionately of the Novominsker’s place of honor in the olam ha’emes, earned through decades of leadership.

“Ashrecha, ashrecha Rebbe… you had the zechus all these years … to be the manhig of Hakadosh Baruch Hu’s kinder… I’m sure from your lofty perch in the ginzei meromim you will continue to be a manhig Yisroel,” said Rabbi Zwiebel, adding simply, “Ashrecha, and ashreinu that we were zoche.”