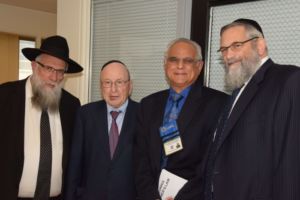 On Friday, August 18th, Agudath Israel of California presidium members, Rabbi Berish Goldenberg and Dr. Irving Lebovics met with Dr. Jonathan Lucas, the new Chief Medical Examiner-Coroner for Los Angeles County. Dr. Lucas, who previously served in the same capacity in San Diego and served in the New York City coroner’s office, praised  the work of Agudath Israel, and expressed thanks for its efforts in securing a CT scanner for the coroner’s office. The LA coroner is now one of only 4 offices nationally to have such a unit, which helps coroners process cases more efficiently and avoid invasive autopsies in cases of religious objection.

Dr. Lucas stated that this was one of the first community meetings he has taken in his new position. The discussion covered many topics important to the Orthodox Jewish community including streamlining the processing of paperwork during weekends and legal holidays which is essential to expediting an immediate burial as required under Jewish law.

“This meeting,” said Dr. Lebovics, “was extremely positive. We look forward to continuing the same wonderful relationship that we have had with the Los Angeles County Coroner’s office for more than 25 years.”