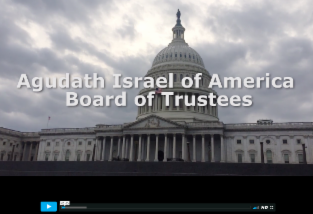 A highlight of the mission to Washington was the group’s hour-long conversation with the Secretary of Education, Betsy DeVos. 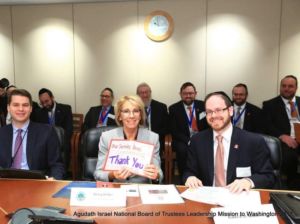 To read more about the topics that were discussed in the meeting and to view additional pictures click here. The meeting with Secretary DeVos was also highlighted by several media outlets including the Washington Post, JTA, Jewish Press and Jewish Insider. (Click on the publication name to view the articles.)

Executive budgets are an interesting thing. They are often an expression of the governing executive’s ideals, but may look entirely different when the legislative branch finishes “editing” the document. This week, President Trump released his budget blueprint and with $9 billion in cuts to the Department of Education, but a promise of $1.4 billion in “school choice” funding, the reactions have been mixed.  Of course, Congress will likely make significant changes to all aspects of the budget, and Agudath Israel will be involved at every step of the process.

Similarly, in New Jersey, Governor Chris Christie released his budget proposal which shocked many observers by eliminating the $11.2 million in nonpublic security funding that the governor signed into law just a few months earlier. 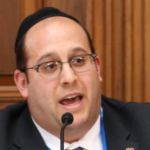 Our New Jersey Director, Rabbi Avi Schnall questioned the mixed messages coming from Governor Christie. In September, the governor seemed to acknowledge that the safety of nonpublic school students was no less important than that of their public school counterparts. What message is the governor now delivering by eliminating the entire nonpublic school security program? Agudath Israel issued a call to action (click here) and called upon New Jersey legislative leaders to reinstate the funding.

Finally, in Maryland, the new BOOST scholarship program for low-income students has been the subject of a brewing budget battle between the governor, House, and Senate (click here to read more).

Illinois doesn’t have a budget due to the political impasse, but that hasn’t stopped Agudath Israel’s Rabbi Shlomo Soroka who is working closely with State Representative Lou Lang (D- Skokie) on a $25 million security funding proposal. In Rabbi Soroka’s words, “a security risk is not something that can wait to be addressed.” (Click here for more details.)

Looking ahead to next week, Agudath Israel’s rescheduled Albany mission will take place on Monday (no snow storm expected at this time), the Texas Senate Education Committee will have a hearing on SB 3 (a broad education savings account and scholarship tax credit program), and scholarship bills are advancing in Indiana, Minnesota, Pennsylvania and Tennessee.