Over forty administrators and principals of Jewish schools from throughout New Jersey gathered at PCS headquarters in Lakewood for a special Agudath Israel workshop. The workshop detailed numerous recent changes to Title I and Title IIA federal education funding under the Every Student Succeeds Act (ESSA) that can greatly benefit nonpublic educational institutions. 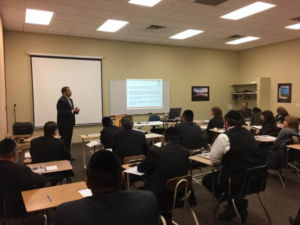 Rabbi Abba Cohen, vice president for federal affairs and Washington director and counsel for Agudath Israel of America, and Michael Coppotelli, associate superintendent of schools for the Archdiocese of New York, detailed the key changes, and how nonpublic schools can receive increased funding for several vital services. Some of the most consequential changes include new qualifying services such as one-on-one tutoring, mentoring and counseling and safeguards to ensure that nonpublic schools receive the funding they’re entitled to. Rabbi Cohen stressed that he and other Agudath Israel activists have been working in Washington for nearly a decade to secure these changes. He expressed his pleasure at the opportunity to deliver the news directly to our community’s beneficiaries.

“Agudath Israel is proud to work tirelessly and deliver on behalf of our community’s children at the federal, state and local level,” said Rabbi Avi Schnall, Agudath Israel’s New Jersey director, who chaired the event.