Governor Cuomo announced today that several micro-clusters have shown significant reductions in positivity rates, and thus restrictions in several areas will be lessened.
Specifically, areas of Queens and Far Rockaway, including red zones, will all move to yellow zones. Red zones in Brooklyn and Rockland and Orange Counties have shown progress, but are not yet ready to open. Orange zones in Brooklyn will move to yellow. The laws for each zone are described here.

For the first time, the governor has announced specific thresholds which must be reached over a 10-day period for areas to reduce restrictions, something Agudath Israel has requested repeatedly. However, since “other considerations” are also taken into account, this may be difficult to precisely pinpoint. 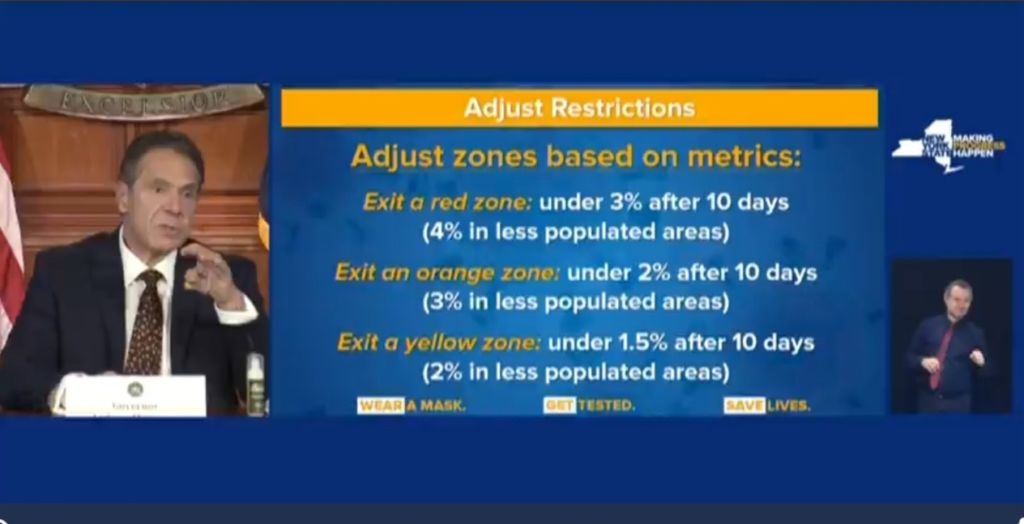 While the progress announced today is welcome, areas in Brooklyn and Rockland and Orange counties are suffering. Agudath Israel continues its conversations with governmental officials at all levels to allow schools, shuls, and businesses in our community to reopen as soon as safely possible.

Agudath Israel reminds the community: the increased testing and enhanced vigilance toward safety protocols is clearly working. All are urged to continue and redouble these efforts.

In a subsequent call with the Governor’s staff and yeshiva leaders, some additional details were shared for areas that have moved to yellow zones:
* Businesses are allowed to reopen effective tomorrow.
* Shuls may reopen at 50% capacity effective tomorrow.
* Schools are allowed to reopen effective Monday. A percentage of students will require periodic testing in coordination with the local health department for purposes of ensuring there is no spread. (Schools may consider testing students before school reopens to be aware of positive cases before they are mixed into the population.)
* The request of Agudath Israel and others to amend the rules of the number of cases that can trigger a school closure is being reexamined. It is illogical for a school of 3,000 to be closed for the same number of cases as a school of 50.
* Red zone areas, which includes much of Brooklyn, will be reassessed “soon” to see if they can be moved to orange or yellow status, assuming positive trends continue.

This information is expected to be formalized and posted to the state website.