Nurturing, Educating, and Entertaining at Pirchei and Bnos

Nurturing, Educating, and Entertaining at Pirchei and Bnos
Print 🖨 PDF 📄 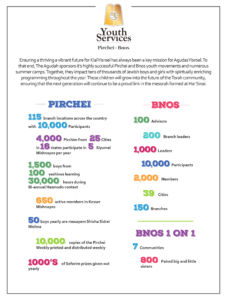 While both of The Agudah’s Pirchei and Bnos have evolved over their many years of serving the Jewish community, their original mission remains unchanged: providing enrichment to boys and girls outside of an academic environment, while giving them a sense of belonging to a larger entity.

“Kids can come to Pirchei on a Shabbos afternoon, or any other time, with no pressure,” explained Pirchei’s national director, Rabbi Ephraim Levi. “Here, you are part of the chevra, one of the boys, and that does so much for a kid. No one cares what grades you get here.”

“A girl who comes to school who isn’t academically inclined may feel like a zero, but in Bnos she can be a 100,” added Mrs. Chana Baila Hass, national director of Bnos Agudath Israel of America.

They may be serving some of the youngest Agudists, but Pirchei and Bnos are among the oldest programs being operated today by Agudath Israel of America. Both were founded in Europe prior to the outbreak of World War II and were established to ensure that young Jewish girls and boys could learn an appreciation of a Torah lifestyle in a warm, congenial atmosphere.

“Bnos was started by Sarah Schenirer in Krakow,” remarked Mrs. Hass. “They took public school girls and gave them a glimpse of Shabbos and an appreciation for Shabbos.”

Pirchei, too, has roots that go back almost 100 years, noted Rabbi Levi.

“Pirchei was already in existence at the founding of Agudas Yisroel, and was alive and well in the old country before the war,” noted Rabbi Levi.

While Pirchei and Bnos are most closely associated with Shabbos afternoon groups, both hav considerable amounts of additional programming, with every branch tailoring its offerings to meet the needs and dynamics of the local community. Many Bnos branches run other activities including Sunday groups, pen pal programs, Bnos 1on 1, Bnos Bikur Cholim and host inter-city Shabbosos, with the annual national convention the highlight of the year for Bnos girls.

Pirchei is currently less focused on Shabbos groups than in previous years, with programming that ranges from youth minyanim, to Chol Hamoed trips and just about everything in between. A full array of learning opportunities, including the highly popular father-son Avos U’Bonim program provides opportunities at multiple levels to boys of all ages and Pirchei holds four regional inter-branch siyumei mishnayos weekends as well as a national siyum. But it is the nationwide bi-annual Chol Hamoed hasmada contest that Rabbi Levi describes as “the crown jewel of Pirchei.”

“This is all voluntary, while the boys are on vacation and that is why it is so choshuv,” explained Rabbi Levi. “No one is forcing anyone to do anything and we can have 1,500 boys learning on their own initiative.”

Both Pirchei and Bnos continue finding new ways to attract kids, blending their most popular offerings with new ideas. Plans are currently underway at Bnos to start a monthly newsletter and to have more inter-city Shabbosos for middle schoolers, while right now Pirchei is going full steam ahead with the Succos hasmada program and Chol Hamoed trips. While the two groups may run different types of projects, their main objective is very much the same.

“Ultimately, it’s all about connecting with the kids,” observed Rabbi Levi.