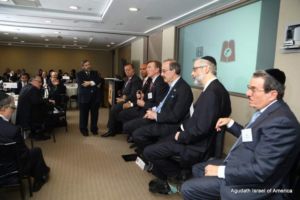 The November 2nd Breakfast presents a unique and valuable opportunity for Agudath Israel’s lay leadership to meet and engage in dialogue with elected officials and candidates. In attendance at the event will be prominent communal, civic, religious and governmental leaders with an interest in public policy, and a proven track record of involvement and accomplishment.

A highlight of the event will be an address by NYS Attorney General Eric T. Schneiderman on issues of concern to the community. Greetings will be delivered by Acting Brooklyn District Attorney Eric Gonzalez.

Agudath Israel of America is a national Orthodox Jewish organization that services the community with a multi-faceted array of charitable, educational and social service projects. Through its national Office of Government Affairs, its full-time Washington Office, and its regional chapters throughout the nation, Agudath Israel frequently takes advocacy positions before federal, state and local governmental bodies. In so doing, Agudath Israel seeks to protect the rights and advance the interests of observant Jews and their growing network of educational and religious institutions; to promote the well-being of Israel and Jews across the globe; and to offer a uniquely Orthodox Jewish perspective on contemporary issues of public concern.

Joseph B. Stamm will serve as Chairman of the event. Mr. Stamm is the CEO and President, NYCHSRO/MedReview. The Breakfast will be sponsored by Alma Bank.

The event is being hosted by Jeffrey Weisenfeld, Principal at Alliance Bernstein Global Wealth Management, and is being coordinated by The Friedlander Group and its CEO, Ezra Friedlander.

The significance of the Legislative Breakfast is summed up by Rabbi David Zwiebel, executive vice president of Agudath Israel: “Our annual legislative event serves as an impressive demonstration of the high level of involvement of the Orthodox community and creates a timely and vital reminder that the community cares deeply about where our government leaders stand on the issues of the day.”