In a friend-of-the-court brief filed with the Supreme Court of the United States seven major national Jewish organizations urged the Court to grant broad freedom to religious institutions by allowing them total authority to decide who is a “minister.” The Supreme Court will hear oral argument in April in the cases titled Our Lady of Guadalupe v. Agnes Morrissey-Berru and St. James School v. Darryl Biel, and the outcome has enormous consequences for the autonomy of religious entities and their right to determine the conditions of employment of those who provide religious services.
The National Jewish Commission on Law and Public Affairs (COLPA) submitted  an amicus curiae brief authored by noted constitutional attorney Nathan Lewin arguing that religious employers, such as religious schools, be accorded full constitutional authority to make their own determination as to who fulfils the functions of a “minister.”   The brief was joined by Agudath Israel of America, Agudas Harabbonim of the United States and Canada, the National Council of Young Israel, the Orthodox Jewish Chamber of Commerce, the Rabbinical Alliance of America, and the Rabbinical Council of America.
Mr. Lewin’s brief presents a uniquely Jewish exploration of the question. It includes vignettes of Jewish communities and institutions that flourished when they were given autonomy to make their own religious determinations and how government control had suppressed Jewish religious observance. The brief argues that government agencies should not determine whether a teacher in a religious school performs the functions of a “minister,” as the Ninth Circuit Court of Appeals did in the cases now before the Supreme Court. That interferes with the religious autonomy of religious organizations in violation of the First Amendment’s guarantees of religious freedom.
Mr. Lewin said, “As Pirkei Avot says, ‘Asei lecha Rav.’ Provide for yourself a Rav. Our tradition teaches that we make our own ‘minister.’ The government does not decide who is my ‘minister.’ I trust that this uniquely Jewish brief will inform the Supreme Court Justices of the Jewish tradition.”
“We believe that it is vitally important for the Supreme Court to respect the autonomy of religious organizations to govern their own internal affairs and adhere to their own employment decisions, particularly in regard to the status and functions of their employees,” stated Rabbi Abba Cohen, Agudath Israel’s Vice President for Government Affairs and Washington Director. “Agudath Israel is pleased to be part of this COLPA brief, so expertly and compellingly crafted by Mr. Lewin, and hopes that the Court will accept the arguments presented in it.”
Click on the image below to see the Amicus brief filed by Colpa: 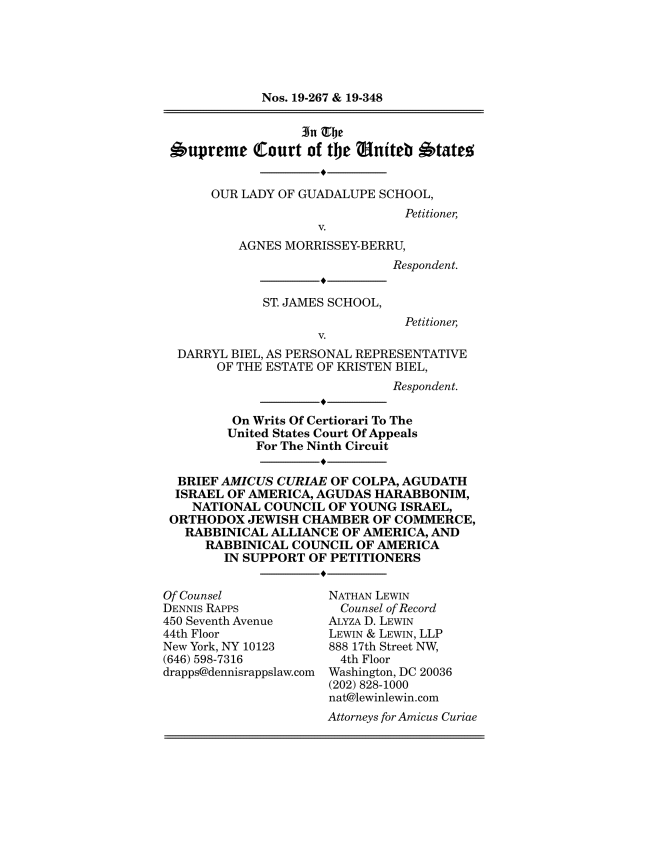