Every day at Camp Agudah is exciting and memorable. However, this past Thursday, 22 Tamuz (July 28th) was truly special. It was on that day that the Moetzes Gedolei HaTorah held a meeting at Camp Agudah.

The excitement began half an hour before lunch when an announcement was made that activities would end early. The campers were given instructions to return to their bunks to don white shirts and hurry down to the camp gate to meet the Gedolim who would soon be arriving. Minutes later, spirited singing erupted as the cars began driving through the gate. 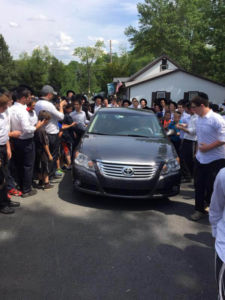 Campers and staff members extended their hands through the open car window to greet the Roshei Yeshivah who did their best to personally greet everyone.

The meeting was held in a dining room of the camp’s beautiful main building. The dining room’s doors have windows and as the meeting continued, campers continued to look through the windows to watch as the gedolim convened. When someone suggested that perhaps such behavior was not respectful of the gedolim’s privacy, the camp’s mara d’asra Harav Yisroel Reisman disagreed. He maintained that the children were not disturbing the meeting in any way and that if a child growing up today has a strong desire to get a glimpse of a gadol b’Yisrael, this should be encouraged, not discouraged.

As the three hour meeting drew to a close, an announcement was heard throughout the camp, instructing campers to once again don their white shirts to escort the gedolim from their meeting to the various battei medrash, to which they would proceed for Minchah and then address those assembled. Once again, campers of all ages stood and watched in awe as the gedolim emerged from their meeting room; young and old then walked alongside the gedolim as they made their way through the camp.

Following Minchah, Rav Kotler addressed the masmidim in their beautiful beis medrash. (This year, the masmidim are led by Harav Elimelech Belsky, of Kiryat Sefer, who has been well received as a successor to his beloved and unforgettable father, Harav Chaim Yisroel Belsky zt”l.) Rav Kotler lauded the bachurim for having made the decision to use their summer vacation primarily for limud haTorah in a program that is sure to have a powerful impact on them.

In his address to the older campers, the Vyelepoler Rebbe recalled his days as a camper in Camp Agudah when it first moved from Highmount to Ferndale. He told the boys that what they can accomplish for themselves by performing acts of chesed for one another in camp can be a solid foundation for character building. 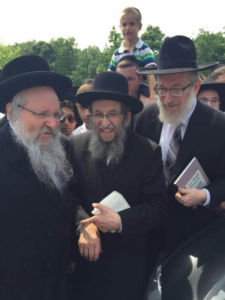 Rav Kamenetsky spoke to the younger campers about the need to feel and express hakaras hatov to their counselors and rebbeim, and to their parents for sending them to camp. The Rosh Yeshivah beamed with pleasure when he was later informed that the camp was in the midst of a major hakaras hatov awareness program, involving daily recordings in a “gratitude diary” and being awarded prizes and other incentives.

At the end of the day, the gedolim took their leave of campers and staff and headed to their respective destinations. The visit came to an end, but the memory of that glorious day will be with young and old for the rest of their lives.