Day by day, minute by minute, the opportunity to be part of history in the making inches ever closer.
Never before have so many people been on the verge of successfully completing the Daf Yomi cycle, bringing Rav Meir Shapiro’s dream to life in an unprecedented fashion. Never before has a Siyum HaShas sparked so many new Torah initiatives, kindling a worldwide spark of hasmadah that burns brighter with every passing day. Never before have the words ki heim chayeinu inspired tens of thousands of lomdim of all ages to commit to k’vias itim l’Torah on a regular basis. With the 13th Global Siyum HaShas poised to take its place in the record books in less than two months, senior members of Agudath Israel of America took the opportunity to express its gratitude to Proud Moments ABA, one of the Pillars of The Siyum, for its unwavering support of limud Torah.
Speaking at Proud Moments’ Boro Park offices, Agudah board of trustees’ member Chaskel Bennett, described Proud Moments as the “best of the best,” and thanked the Rubin and Goldfeder families for their partnership in The Siyum. Agudah Executive Vice President Rabbi Chaim Dovid Zwiebel lauded Proud Moments as a role model for other community businesses and described the Siyum HaShas as a bridge that unites Klal Yisroel in every corner of the world and from all backgrounds. That theme was echoed in Rabbi Zwiebel’s remarks praising New York State Assemblywoman Rodneyse Bichotte, a member of the Assembly’s health committee, who has spent her time in office building bridges between communities, who was awarded a plaque in recognition of her exemplary devotion to the community and its special needs children by Proud Moments CEO Eli Rubin. Accepting the award, Assemblywoman Bichotte spoke briefly about the common bond shared by people of faith who raise their children with similar values, noting that those principles are actually Torah based.
Among those in attendance were the The Siyum’s executive vice president, Rabbi Shlomo Gertzulin; national committee member, Rafi Hassan; director of the Agudah’s Lefkowitz Leadership Initiative, Rabbi Shai Markowitz; Flatbush Jewish Community Coalition chairman, Josh Mehlman; Agudah’s national director of development, Rabbi Naftali Miller; Agudah’s director of New York relations, Rabbi Yeruchim Silber; Roth&Co co-managing partner, Zacharia Waxler; and Agudah’s vice president for media affairs, Leah Zagelbaum.
Speaking on behalf of Proud Moments, Mr. Rubin said that the company was privileged to support the Agudah’s many efforts, including its advocacy, which has forged deep relationships with Assemblywoman Bichotte and many other elected officials, and its commitment to harbatzas Torah which extends to The Siyum and beyond. Rabbi Miller noted that Mr. Rubin has a long history with the Agudah through his father, one that has carried through to The Siyum.
“Proud Moments and The Siyum have much in common,” observed Rabbi Miller. “Both are entities that are dedicated to ensuring that every individual is part of the larger whole of the greater community. We at the Agudah are proud to be associated with Proud Moments whose integrity and stellar reputation have benefitted countless children, and are grateful to count them as one of the esteemed Pillars of The Siyum.” 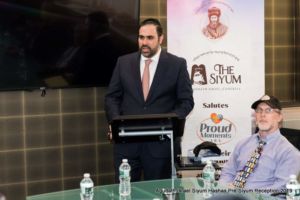 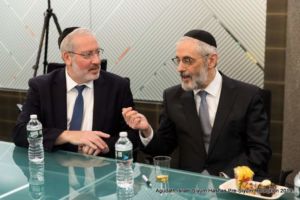 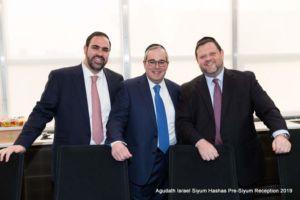 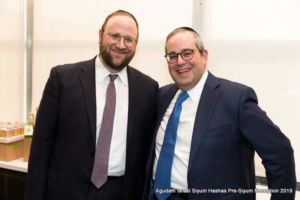 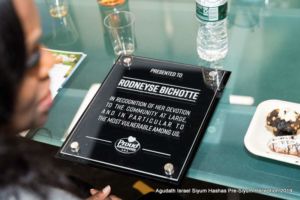 Assemblymember Rodneyse Bichotte with her award. 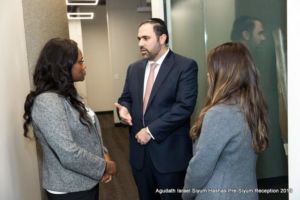