Big changes are coming to the NYC election process. Are voters ready?

RCV is not a new system. It is used in countries worldwide and in some United States municipalities in states such as Colorado, Florida, Massachusetts, Michigan, Minnesota, Maryland, and more. Even New York has used a form of RCV for Board of Education elections in past years.

The first election under the new rules to use RCV will be the February 2 special election in Council District 24. Voters in Kew Gardens Hills, Fresh Meadows, Hillcrest, Jamaica Estates, Briarwood, and part of Jamaica will be choosing a replacement to finish ex-Councilmember Rory Lancman’s term. Lancman left the Council to work in Governor Andrew Cuomo’s administration as the state’s first Special Counsel for Ratepayer Protection.

To ensure full voter participation in the election, Agudath Israel of America is working to educate voters on RCV.

How the system works now

Under the traditional voting system, a voter sees a choice of candidates for an office and casts a ballot for one person. The votes are counted, and the candidate who earned the most votes wins the election. However, that person may not have won a majority of the vote.

For example, if five people run for mayor, the results could look like this: 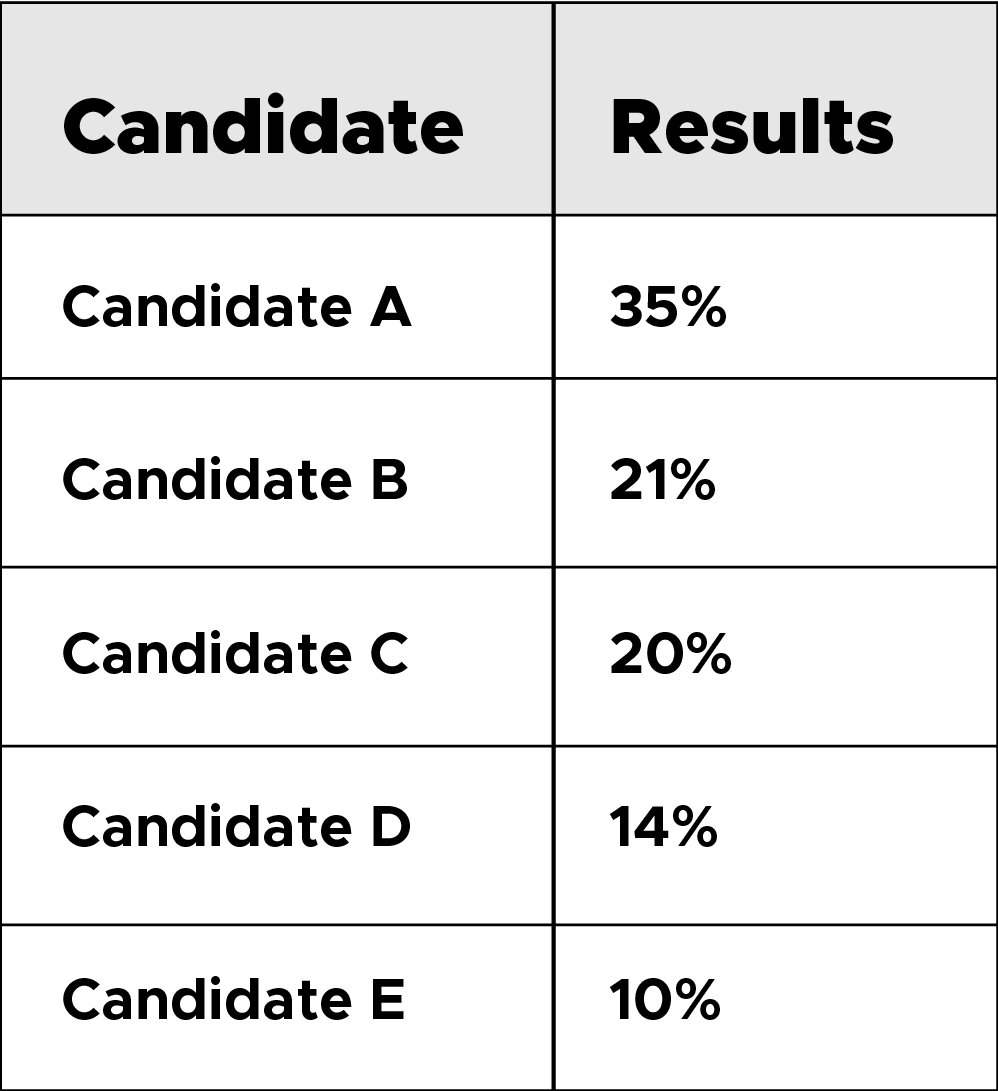 While Candidate 1 won the most votes, he or she does not have a majority of the votes cast, meaning more than 50%. The more candidates that run, the more likely that the winner will NOT have a majority. This is relevant because in some elections a candidate is required to receive a majority (50% +1) of the votes to win, if this does not occur a runoff election is held.

With RCV, voters rank up to five candidates on the ballot. They assign their preferred candidate the number 1, their next favorite number 2, and so on up to five choices. The ranking process is fairly intuitive; people naturally rank their choices all the time, whether they’re discussing an election or deciding what to eat for dinner. 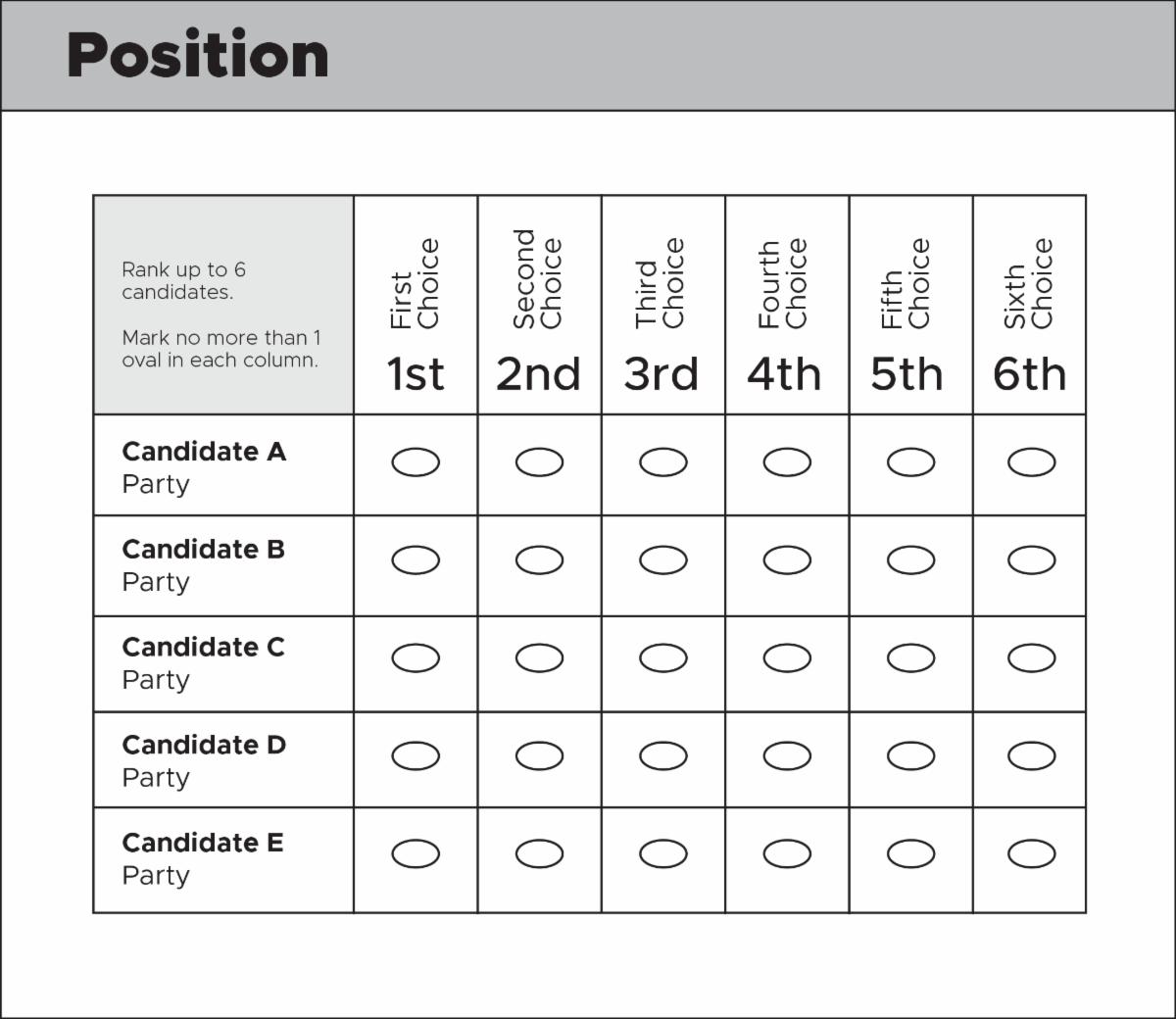 The Board of Elections (BOE) then counts the votes to find a majority (50%+1) winner. If one candidate wins a majority of first-choice votes, the election is done. However, if no candidate receives a majority of the vote, the candidate with the lowest vote count is then eliminated from the race, and the second-choice votes of their ballots are added to the tallies of the remaining 4 candidates.

In the example below, Candidate 5 would drop out. Voters who chose Candidate 5 as their first choice now have their votes distributed to their second-choice candidates. That could change the results to look like this: Candidate 1: 37%, Candidate 2: 27%, Candidate 3: 21%, Candidate 4: 15%. Notice that Candidate 5’s 10% is now distributed among the other contenders, narrowing the gap between Candidates 1 and 2. Since there is still no majority, the elimination process would continue until one candidate earns 50%+1.

Pros and Cons of RCV

Proponents of RCV list several benefits to the system:

One, it may save voters and the city time and money by removing the need for run-off elections. Run-off elections cost the city millions and usually have extremely low voter turnout.

Two, they say it leads to more democratic representation. Currently, two-thirds of candidates win the primary election without a majority vote. It also bypasses the “spoiler effect” where a rival contender splits the most popular candidate’s vote.

Three, it discourages negative campaigning since candidates want to be second or third choices for other nominees’ supporters.

On the other hand, detractors worry about educating voters on how to use the new system. Improperly filled ballots can be disqualified, disenfranchising voters. Some council members say that the campaign finance board isn’t allocating enough money to reach voters.

Particularly at risk are the elderly, non-native English speakers, and minorities. Many of these voters don’t have internet access and won’t be seeing the digital educational campaigns. And due to Corona, reaching voters in person, especially elderly ones, is extremely difficult.

In light of these concerns, Agudath Israel is addressing voters’ common questions about the process:

Must a voter rank the full five candidates?

No, a voter can choose to rank between one and five candidates on the ballot. As long as a first-choice candidate is selected, the ballot is valid.

Does RCV give each voter more than one vote?

Can a voter rank the same candidate more than once?

Will choosing a 2nd (or 3rd, 4th, or 5th) place option hurt a voter’s first-choice candidate?

No. A voter’s vote will only transfer to another candidate if the first-place candidate is eliminated.

No. The Board of Election will release unofficial first-round results on election night. However, there will still be a seven-day delay after the election for the final tally, but that’s due to counting absentee ballots, not to RCV.

Does the Board of Elections have the computers ready for an RCV election?

Yes, the computers that it already has can read the RCV ballots.

Do absentee ballots work in an RCV election?

Yes, a voter requests, fills out, and sends in an absentee ballot the same way as in a regular election.

How will voters know what to do at the election on February 2?

Both government offices and private organizations such as Agudath Israel are stepping up efforts to educate voters through flyers, mailing, posters, billboards, and websites in multiple languages. There will also be detailed instructions at the polling locations and on the ballot itself.

RCV voting is now the law in NYC; the February 2 election is only the first. In the words of R’ Yeruchim Silber, Director of New York Government Relations at Agudath Israel, “While we have some concerns with Ranked Choice Voting, Agudath Israel has a responsibility to educate and inform our constituents in order for them to be able to vote responsibly and have their votes count.”

For those eligible to vote in the Queens 24th Council District Election go to https://votequeens.org/.