Reflections on our name

Reflections on our name
Print 🖨 PDF 📄

Coalitions and partnerships are at the core of Agudath Israel’s mission. The Agudah movement was founded as an historic coalition of Orthodox groups in 1912. In fact, our very name Agudah, literally a “bundle,” refers to disparate groups united by a common cause, tied together by a figurative “string.” This week, I had the opportunity to see some of our current coalitions in action.

I began my week in Indianapolis, where, together with Agudath Israel’s Ohio director, Rabbi Yitz Frank, I attended the American Federation for Children’s annual school choice summit. While the conference included appearances by Secretary of Education Betsy DeVos, Governor Jeb Bush, and even my former boss and current member of Agudath Israel of America’s board of trustees, Rabbi Yehiel M. Kalish, the greatest part of the summit was the opportunity to meet with many of our school choice coalition partners from around the country. 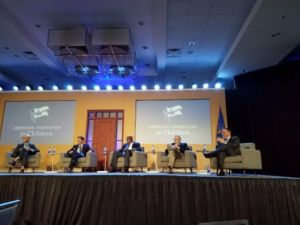 I then traveled to Chicago to attend the annual dinner of Agudath Israel of Illinois and heard its CEO, Rabbi Yitzchok Ehrman, speak about his successful partnerships with organizations that feed the hungry and care for those with special needs, as  described in more detail here. The next day, our director of New York government relations, Rabbi Yeruchim Silber, testified in support of adult literacy programs as part of the New York City Coalition for Adult Literacy.

Whether the issue is security funding, religious freedom, or school choice, many of our great achievements were only made possible because of coalitions and partnerships within and beyond the Jewish community. So to our many coalition partners — thank you!