Photos Courtesy of Boro Park JCC
The more things change, the more they stay the same.
This truism was hammered home to Agudath Israel Executive Vice President Rabbi Chaim Dovid Zwiebel after participating in a meeting earlier this week with other Jewish leaders with United States Attorney General William Barr. This Tuesday, January 28, in a historic event, Attorney General Barr visited the Boro Park JCC to meet with Jewish leaders. The meeting was in response to the recent rise in anti-Semitic attacks targeting Jews in different parts of the country and especially in Brooklyn.
AG Barr did more than simply express his distress over the hate crimes. He pledged the support of the Department of Justice (DOJ) to end this disturbing trend. Among the initiatives mentioned by the Attorney General:
Attorney General Barr explained to his audience that he believes the rise in anti-Semitism is directly connected to the moral decline in America. In his opinion, people without religious values navigate the world without restraint.
The Attorney General’s words were a heartening show of support for the Jewish community.
But Rabbi Zwiebel was struck by another point.
He remembered a different speech he heard from Attorney General Barr, nearly 30 years ago.
In 1992, William Barr was also serving as United States Attorney General, then under the first Bush administration. At its annual dinner, Agudah honored the Attorney General with its Humanitarian Award.
Why?
In 1991, the DOJ, under the leadership of AG Barr, filed a civil suit against the village of Airmont, New York. Airmont was creating zoning laws to keep Jewish residents out of the neighborhood. The lawsuit was a landmark case, challenging discrimination against Orthodox Jews.
In his acceptance speech at the 1992 Agudath Israel dinner, AG Barr spoke about two problems:
1.     Rise in anti-Semitic incidents and hate crimes
2.     Crumbling of traditional values
Yes, the exact same issues that AG Barr is addressing in 2020.
Rabbi Zwiebel sees two messages here.
First, he says, is “commentary on the fact that the issues we’re confronting now are not new.” Anti-Semitism has been with us throughout history and in the United States, too.
Second is the “consistency of AG Barr as a forceful voice in bringing the full force of the U.S. government to combat anti-Semitism and in recognizing the need to address social trends as a cause for hate crimes.”
Despite the gap of almost 30 years, AG Barr’s message remains strong and consistent.
Agudath Israel is grateful to have a friend of the Jewish community and a champion of religious liberty at the helm of the U.S. Department of Justice. 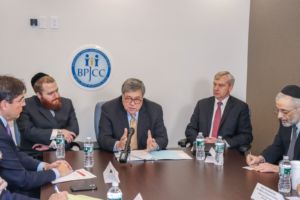 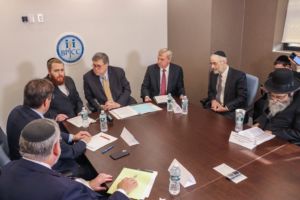 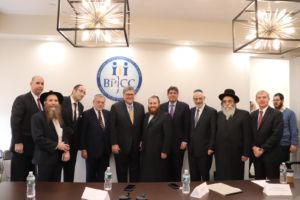 Photos of Attorney General William Barr and Jewish community leaders at a meeting at the Boro Park JCC on Tuesday, January 28th.