In a highly anticipated meeting yesterday, the New York State Board of Regents met regarding equivalency of instruction in nonpublic schools. Rabbi Chaim Dovid Zwiebel and Rabbi Yeruchim Silber of Agudath Israel of America and other yeshiva advocates were in attendance.

Agudath ‎Israel has, for years now, impressed our concerns regarding rigid government oversight and control of our yeshivas upon various decision makers. Last summer, when former Commissioner Elia proposed rigid nonpublic school regulations, the Jewish community came together in a remarkable display of unity, sending an unprecedented 140,000 letters to the Board of Regents during the public comment period.

Assistant Commissioner for Nonpublic Schools Christina Coughlin relayed that two additional staff members were hired to review the comments, and summarized themes in comments received, as noted in the SED press release here and detailed in their PowerPoint here. The Board of Regents, and new Interim Commissioner Shannon Tahoe, were clearly moved by the volume, content, and conviction of the letters received and meetings convened. Interim Commissioner Tahoe articulated the need to balance state control with parental autonomy and religious rights.

We are happy to report that while some expressed a desire to monitor and enforce how education occurs in nonpublic schools, the general feeling in the room was that the previous regulations were released prematurely and with insufficient stakeholder involvement. They were therefore not advanced.

What is less clear, and what will remain front and center on their and our agenda is: if not these regulations, what will replace them? Will the next iteration allow us to practice our religion and educate our children as we see fit? In other words, this is far from over.

But for now, it is gratifying to see fruits of the work and prayers our community has invested on this seminal issue. Agudath Israel expresses its deep gratitude and humble appreciation to the tens of thousands of yeshiva parents, graduates, and students who stood together in this historic grassroots effort to protect Jewish education. 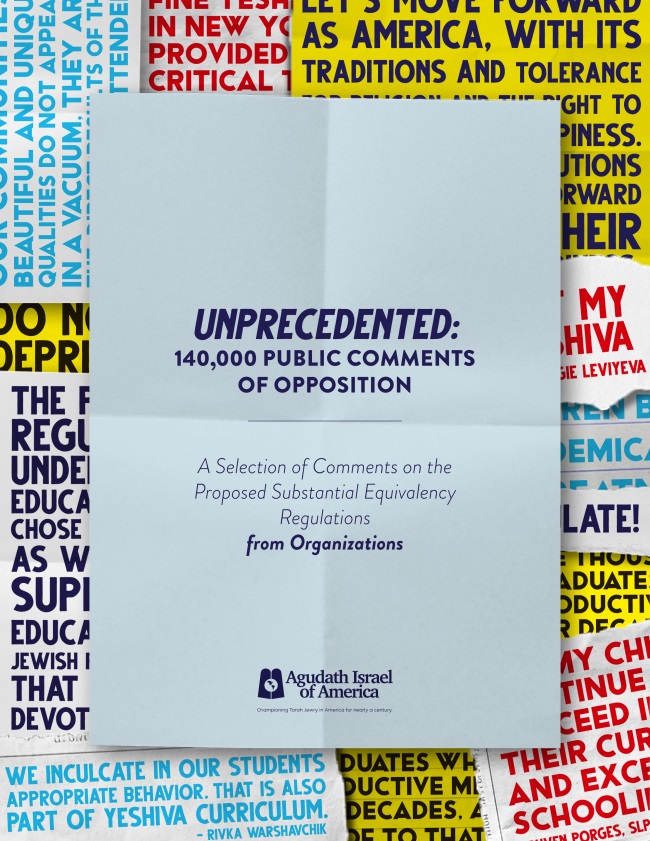 The cover of the booklet of comments compiled for legislators by Agudath Israel of America. Photo Credits: Chani Owsianka