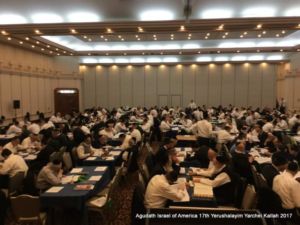 Hundreds shteiging at the 17th Yerushalayim Yarchei Kallah in 2017

The aircraft wheels had barely touched down on the tarmac at various U.S. airports last year, when participants in the just concluded Agudath Israel of America Yarchei Kallah began flooding the Agudah office with calls. “What is the date of next year’s Yarchei Kallah?,” they were eager to know.

Rabbi Shlomo Gertzulin, Agudath Israel’s Executive Vice President for Finance and Administration, is candid as he relates that the enthusiasm and advance anticipation for the Yarchei Kallah program eclipses what Agudah staff see for virtually any other program. The numbers speak for themselves. What began eighteen years ago as a small program with barely a few dozen participants gathered in a small Bais Medrash, has grown steadily over the years, attracting a record attendance of over 400 participants last year – with an even greater number expected for the upcoming “Chai Anniversary” Yarchei Kallah program, b’ezras Hashem.

And yes, as per public demand, the dates have been announced and registration is open. The upcoming Yarchei Kallah will be”H take place from Monday, 28 Teves (January 15th), through Thursday, 2 Shevat (January 18th) at the newly renovated Ramada Hotel. The hotel’s entire ballroom – the largest in Yerushalayim – will once again be transformed into a huge Bais Medrash. The Sugya to be learned this year will be “Pikuach Nefesh and Refuah,” based on the Gemara Maseches Sanhedrin Dafim 72-75.

The nickname “Yeshiva for a Week” was borne out of a remark by HaRav Dovid Cohen shlit”a, Rosh Yeshivas Chevron, during his shiur at the Yarchei Kallah two years ago. The Rosh Yeshiva explained that he considers all participants as individuals who learn with him in this unique and extraordinary Yeshiva, a perspective that made an indelible impression upon the audience. The program is geared towards businessmen and professionals who put in a full workday throughout the year in their home communities, yet leave it all behind to come to Yerushalayim to learn two full sedarim plus, with the dedication and enthusiasm of a Yeshiva bochur during these four days. By 9:00 am on the first day, the Bais Medrash is packed to capacity, with the pilpul chaverim booming across the room.

Learning with such intensity is a testament to the dedication and motivation of Yarchei Kallah attendees, which is compounded by the rich and well thought out program, which encompasses many months of work by Agudath Israel’s Torah Projects Commission, co-chaired by Rabbi Gedaliah Weinberger and Rabbi Shlomo Gottesman. In addition, the Commission’s staff, headed up by Rabbi Avrohom Nisan Perl and Rabbi Eliyahu Simcha Bamberger invest inestimable efforts to arrange shiurim, chavrusos and individual program tracks, amongst a myriad of other program-related needs. Rabbi Shlomo Gottesman has been a major force in the Yarchei Kallah since its inception, coordinating the shiurim schedule and the numerous magidei shiur who participate, as well as delivering hachanah and chazarah shiurim, both prior to and subsequent to the Yarchei Kallah.

The shiurim and shmuessen are delivered by the highest caliber of Gedolei Eretz Yisroel, such as HaRav Yitzchok Zilberstein shlit”a; HaRav Boruch Mordechai Ezrachi shlit”a; HaRav Dovid Cohen shlit”a and HaRav Asher Weiss shlit”a, and many others. There are also Daf Yomi shiurim, hachana shiurim, shiurei iyun, shiurei halacha l’maaseh, hashkafa shmuessen and more. Everyone’s needs are impeccably catered to, with shiurim tracks in English, Yiddish, and even a newly added Spanish track for a group of participants from Mexico who joined last year for the first time.

In addition to continuously growing number of men participating in the Yarchei Kallah, a growing number of women – exceeding 100 last year – come along with their husbands. Mrs. Aliza Grund has spearheaded the extensive special women’s touring and shiurim program, assisted by Mrs. Debby Jacobs, who has served as the Yarchei Kallah’s Registration and Technical Coordinator virtually since its inception. The women’s program is a wholesome combination of spiritual and physical enjoyment of its own.

Last year’s program was preceded by a special visit to HaRav Chaim Kanievsky shlit”a in Bnei Brak – who gave his special bracha, wishing hatzlacha to Yarchei Kallah participants. Special Tefilla assemblies for both men and women were also held at Kever Rochel. The previous year, Yarchei Kallah participants were taken on a unique tour of Har Hazeisim. Similar highlights are in the works for this year, b’ezras Hashem.

Another unique and very popular component of the annual Yarchei Kallah programs, is an extensive optional pre-Yarchei Kallah weekly teleconference shiur by Rabbi Gottesman, each Monday evening, on the Sugya that will be learned at the Yarchei Kallah. Participants can already be well versed in the Sugya background by the time they arrive in Eretz Yisroel.

A particularly helpful dynamic is the seven hour time difference between the United States and Eretz Yisroel. Even participants who must tend to some business phone calls or emails while in Eretz Yisroel can learn undisturbed and with complete immersion for the full sedarim, which end at 10:00 am American time.

The sight of participants of all ages and backgrounds, from over a dozen states, plus Canada, Mexico and Europe, joining to learn intensely in Yerushalayim for a full workweek is an incredible Kiddush Hashem. A solid majority of participants return year after, and oftentimes bring along new relatives, friends and chavrusos each time. Many of the participants are father-and-son, even grandfather-son-and-grandson. There are also several groups that are all members of a Kehilla, who come along with their Rav.

Are you ready to join? Get Ready…. Set….. Come Aboard!