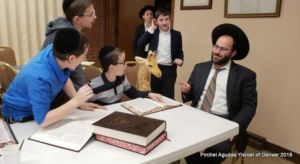 Pirchei Agudas Yisrael of Denver recently announced that Rabbi Raphael Schnall, the 8th-grade rebbi (teacher of Judaic studies) at Hillel Academy of Denver (HAOD), has been hired as Director of all Pirchei activities.

Pirchei is a world-wide movement that was created early in the 20th century to provide meaningful programming for Jewish children through events, programs, learning opportunities and the like. Pirchei of Denver was launched in 2009 by two students of Yeshiva Toras Chaim of Denver (YTCD), Dovi Ort and Aharon Dovid Katz. Aharon Dovid is a Detroit native, and he wanted to create a Pirchei program in Denver similar to the one he’d experienced in Detroit.

“The vision of Pirchei of Denver is to be marbitz Torah (spread Torah) and unite Jewish children throughout the Denver Jewish community,” says Dovi Ort.

Dovi and Aharon Dovid created a city-wide incentivized learning program focused on studying Mishnayos (Mishna) and Gemara (Talmud) outside of regular school. The program was offered at HAOD and Denver Academy of Torah (DAT), and many thousands of mishnayos and hundreds of pages of gemara have been studied in the ensuing nine years. Aharon Dovid and Dovi also organized an annual siyum mishnayos in late May or early June. A siyum is a celebration of the completion of a major section of Torah. The Rocky Mountain Regional Siyum Mishnayos, as it is called, was created to celebrate the Torah studied during the course of the year. The Siyum attracts boys from other Western cities such as Phoenix, Dallas, Houston, and Palo Alto. An extended program is held Friday and Shabbos at YTCD, and features activities, trips, and lots of Torah study. The weekend culminates in the main event on Saturday night, which features a Melava Malka (post-Shabbos feast), prizes distributed to those who participated in the program, and dancing.

Dovi and Aharon Dovid have since moved on from their Pirchei activities. Today, both are married and living in Denver. Since then, the Pirchei program has continued to offer the many different programs they founded. For the past several years, the Pirchei groups and Siyum Mishnayos hosted by YTCD have been organized and coordinated by two students there, cousins Ezriel Abrams and Dovid Abrams.

Rabbi Raphael Schnall arrived in Denver and began serving as a rebbi at HAOD at the start of the 2016-17 school year. The following year, Rabbi Schnall assumed the position of coordinator for the Mishnayos program. During the course of the year, boys earned over 300,000 points as part of the program, which they redeemed for prizes at the Siyum.

“Rabbi Schnall arrived in Denver with years of experience in organizing popular programs for boys,” explains Rabbi Yossi Kaplan, Director of Agudas Yisrael of Colorado. “He created and directed a summer camp in Cleveland for many years prior to his arrival here in Denver, so we were excited to bring him on board last year. His success last year made him a natural choice to become Director of all Pirchei activities.”

Pirchei of Denver has created a mascot, a giraffe, to represent its programs this year. “We are looking forward to a lot of excitement for this year’s learning program, as well as for the Shabbos Pirchei groups,” says Rabbi Schnall. “I encourage everyone to keep an eye out for Gershon the Giraffe and the exciting programs he will herald for the boys of Denver!”

“Rabbi Schnall’s appointment is the latest step in the proud history of Pirchei of Denver,” explains Rabbi Kaplan. “We look forward to great accomplishments from Pirchei Agudas Yisrael of Denver that will build on the past successes we have seen for many years.”