Sanctuaries of faith, not fear

Sanctuaries of faith, not fear

Houses of worship should be warm and welcoming places but instead, some of them have become mini-fortresses where strangers are looked at with suspicion and armed guards or police stand watch outside.

These sentiments were expressed on Wednesday by Agudath Israel delegates to the nearly 30 members of Congress and their staff with whom we met throughout the day. We spoke about fear, and about feeling targeted and discriminated against in the context of zoning laws and even threats or acts of violence. We heard strong statements condemning anti-Semitism and pledges of support. We heard from famed attorney Nathan Lewin, US Special Envoy to Monitor and Combat Anti-Semitism Elan Carr, U.S. Attorney General William Barr, US Secretary of Education Betsy DeVos, and senior members of Congress. 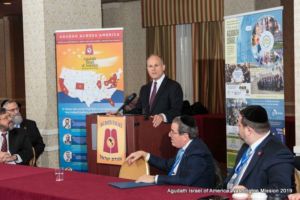 Less than 48 hours later, we heard the terrible news about the terrorist attack on two mosques in New Zealand. Religious individuals, gathering for prayer, were gunned down in their houses of worship. We condemned the attack and expressed our condolences. No community should be targeted because of their faith. Houses of worship should be sanctuaries of faith, not places of fear.

Religious discrimination and security, however, were not the only issues we focused on in Washington. During a panel discussion over lunch, Secretary DeVos, Senator Cruz, and Representative Byrne talked about their federal scholarship tax credit proposal, which now has House and Senate language and was included in President Trump’s proposed budget. Secretary DeVos also spoke about her announcement that the Department of Education would no longer prevent religious entities from serving as third-party educational  providers of secular equitable services.

On the state level, Rabbi Matz reports (below) about the separate House and Senate proposals to expand school choice in Florida, while Rabbi Sadwin helped organize a rally of 1200 nonpublic school students and supporters in Annapolis.

In the Courts: In New York, the battle over state control of private schools continued, with two lawsuits filed so far. On the federal level, an appeals court upheld the constitutionality of the tax-exempt parsonage allowance. Agudath Israel joined a COLPA (National Jewish Commission on Law and Public Affairs) brief authored by Nathan Lewin in this case.

On behalf of everyone at Agudath Israel, we wish our readers a Happy Purim!