Save the Date: October 14th 2018 Agudath Israel of Maryland to Celebrate a Decade of Impact

Save the Date: October 14th 2018 Agudath Israel of Maryland to Celebrate a Decade of Impact 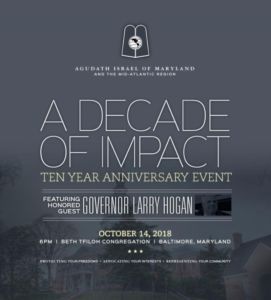 It was a decade ago that community rabbinic and lay leadership came together to pursue the creation of a new type of organization in Maryland. This organization would be one with an acute focus on government affairs. Not simply government affairs, but those sacred and most specific to the needs of the Orthodox Jewish community.

The group contacted Agudath Israel of America, seeking their assistance in establishing this new organization. Later that year, Agudath Israel of Maryland (AIMD) began operations under the leadership of Rabbi Ariel Sadwin.

Fast forward ten years, AIMD is Maryland’s dependable and experienced resource for all things community and government related. During its inaugural decade AIMD effectively addressed countless issues of interest and concern to the community – institutions and individuals alike – and amassed a long list of impressive accomplishments.

Among its more notable achievements is the remarkable impact on Jewish day schools, and on their students and families. AIMD has been the trailblazing entity that has been instrumental to the arrival or expansion of items such as Title I services, BOOST scholarships, 529 tuition benefits, and more, programs that have brought in millions of dollars of communal benefit.

Representing a community whose essence is shaped and guided by Jewish faith and traditions, AIMD has led the charge to protect religious freedoms, navigating a wide variety of situations. Notable among them are protecting religious liberties in the workplace, on college campuses, in hospitals, at the medical examiner, and everywhere else that a situation arises.

On Sunday, October 14, at Beth Tfiloh, the entire community is invited together with our elected officials from all levels of government to join in celebrating AIMD’s “Decade of Impact”. The featured guest of honor who will receive community tribute will be Maryland Governor Larry Hogan in recognition of his leadership in facilitating unprecedented growth to many initiatives of benefit to the community. This gala will present the unique opportunity for all members of the community to show their appreciation for AIMD’s many vital accomplishments which have benefited so many and impacted countless lives.