Print
Thousands of Illinois families were able to breathe a collective sigh of relief after Illinois Governor J.B. Pritzker made a surprise announcement Friday morning that he would not cut a private school tax credit scholarship program if the state budget included adequate public education funding. The final verdict awaited a vote on the budget. Dramatic budget negotiations forced an unanticipated extension of the legislative session but ultimately the Illinois General Assembly passed a budget over the weekend that included full funding for the “Invest in Kids Act” tax credit scholarship program. The original budget proposed by the governor slashed the funding for scholarships in half with a $50 million cut, and that threat was looming over scholarship families for many months. Thanks to a sustained advocacy effort of Agudath Israel of Illinois and its coalition partners, and the support of its legislative allies, the program will remain intact. Benefitting low- and middle-income families who choose to send their children to private schools, $10 million in scholarships has been awarded to over 700 Jewish day school students in the first year of the Invest in Kids Act. The program, which provides scholarships of up to $13,000 per child, has helped over 7,000 children statewide and continues to grow in popularity. Advocacy efforts by Agudath Israel to protect the program kicked into high gear during the last week of the legislative session as scholarship families joined Agudath Israel of Illinois’ director of government affairs, Rabbi Shlomo Soroka, in Springfield. Empower Illinois, the largest scholarship granting organization in the state, spearheaded the campaign dubbed “Save My Scholarship” and executed it in conjunction with their coalition partners including the Catholic Conference of Illinois, as well as others. Hundreds of families from across the state shared their stories with lawmakers 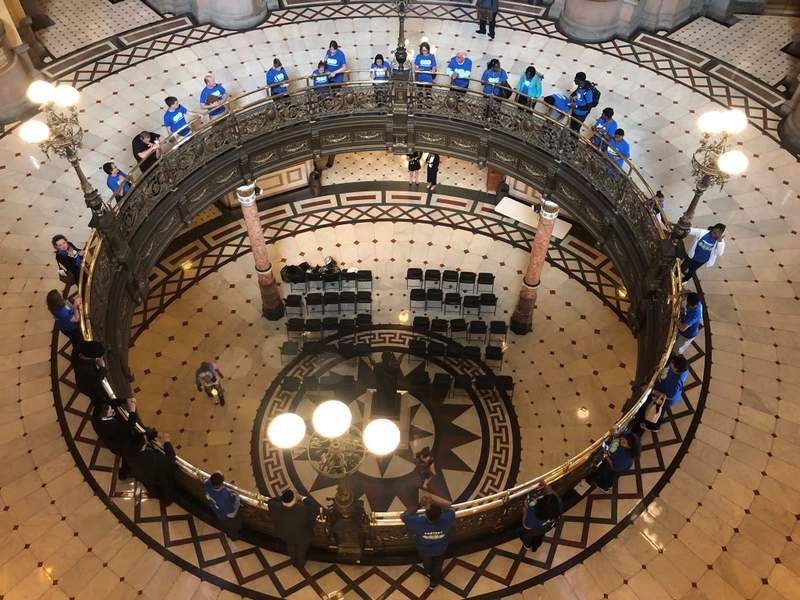 and explained how the program has impacted their lives and the lives of their children. “Grassroots advocacy is critical to our efforts, said Rabbi Soroka. “Lawmakers are impressed by the sacrifices made by regular people to travel to Springfield to see them. It also puts a human face on an issue that is otherwise looked at as a math problem to be solved.” State Representative Yehiel Kalish (D- Chicago) has been a vocal proponent of the program and his efforts were crucial in protecting it. He was joined by state Senator Ram Villivalam (D- Chicago) who became a supporter as he learned more about the Orthodox Jewish educational system and what this program has done for his constituents. The four legislative leaders, Speaker of the House Michael Madigan, Senate President John Cullerton, House Republican Leader Jim Durkin, and Senate Republican Leader William Brady committed to maintaining this bi-partisan agreement program for five years and were successful in holding the line. Governor Pritzker’s spokesperson also expressed commitment “to making sure that all students get the education they deserve.” Agudath Israel of Illinois applauds all the supportive members of the Illinois General Assembly, and now the governor, for putting kids first. It is a victory for the state’s communities, schools, and most importantly, its children.
Sara Rosenbaum2019-06-05T10:41:32-04:00June 5th, 2019|