Security a High Priority as the Siyum Draws Near

Security a High Priority as the Siyum Draws Near
Print 🖨 PDF 📄
With the completion of the 13th Daf Yomi cycle just days away, the upcoming Siyum HaShas will take its place in the history books as not only the largest celebration of limud Torah but also, b’ezras Hashem, the safest.
The Siyum’s chief operating officer, Rabbi Yosef Chaim Golding, has been working closely with over fifty law enforcement agencies including the New Jersey State Police, New Jersey Department of Homeland Security, New York City Police Department, the New York City Mayor’s Office, the FBI and others to ensure the highest level of security at both MetLife Stadium and Barclays Center. Over 300 uniformed police officers will be positioned at MetLife Stadium alone, with countless others, including many who will not be visible to the public, stationed at multiple locations in and around the area.
MetLife Stadium will be on full lockdown from the conclusion of a Sunday afternoon sporting event until the start of The Siyum as crews transition the stadium for the massive event. The NJSP will be at 100 percent deployment for The Siyum, with security at a level described by Captain Peter Velez as “a football game on steroids.”
“Law enforcement officials have said that the safest place to be in New Jersey on January 1st will actually be inside MetLife Stadium,” said Rabbi Golding.
Over the past six months, numerous meetings and planning sessions have also been held with stadium personnel, local EMS supervisors and Hatzolah, who will be on hand for The Siyum. Agudah board of trustees member Chaskel Bennett, The Siyum’s official liaison to Hatzolah, noted that a highly detailed emergency action plan has been created and fine tuned by experienced medical professionals under the supervision of Fran Guthrie and Tony Vaguerio of the New Jersey Sports and Exposition Authority’s EMS team and Hatzolah coordinator Bentzy Lebovitz, with a goal of ensuring public safety.
“While the Agudah is well known for its attention to detail and professionalism when it comes to programming, there are multiple other tracks that will be operating concurrently at The Siyum including security, medical and stadium operations,” said Mr. Bennett. “The public can feel confident that all of the appropriate agencies are on board and are working collaboratively in the exhaustive planning so that The Siyum can proceed smoothly and safely.” 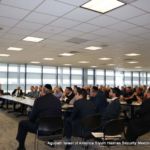 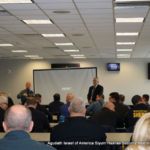 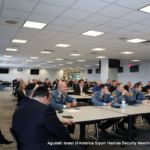 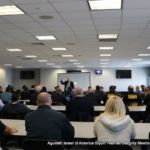 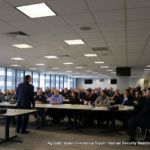 Rabbi Shlomo Gertzulin, Executive Vice President of the Siyum, thanking the close to 100 law enforcement personnel for their help in security aspects of The Siyum. 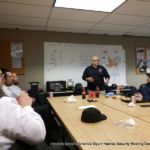 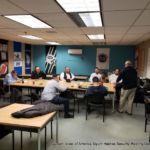 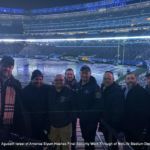