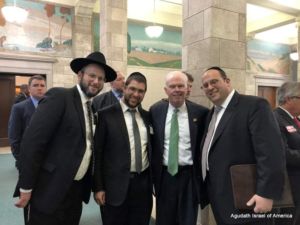 Agudath Israel welcomes the news that NJ Bill S3080, a bill to double nonpublic school security funding, passed unanimously in the Senate Budget Committee yesterday. The funding increase was Agudath Israel’s top legislative priority for this session and was the focus of an intense advocacy effort.

Currently, nonpublic schools receive $75 per student in security funding. S3080 and its companion Assembly bill will increase the funding to $150, bringing the per student funding closer to the amount received by public schools. The bill would mean an overall increase of $11.3 million for nonpublic students.

“All children deserve to be safe, “ says Rabbi Avi Schnall, director of Agudath Israel of America’s New Jersey Office, “regardless of what type of school they attend.”

Assemblyman Gary Schaer, who spearheaded this effort, testified yesterday before the Senate committee. “This is not a race to see who can obtain the most funding,” said Assemblyman Schaer. “It is a race to ensure that our children’s lives are secure and safe.”

Agudath Israel continues to ask its New Jersey constituents to go to its action center and email or call to urge their elected officials to pass the security funding increase. The Assembly version of the bill will be heard in the Assembly Budget Committee on Thursday.