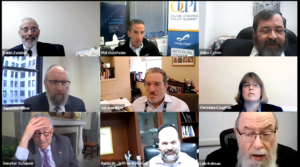 It’s no secret that as Senate Majority Leader and senior senator from New York, Charles Schumer is a man whose time is not easy to pin down. But, putting down his trademark “flip phone” for a while, Senator Schumer made himself available, between votes and phone calls from senators, to present at a webinar held by Agudath Israel’s Yeshiva Services department on the topic of the funds and resources made available to Americans, and particularly relevant to the Orthodox Jewish community by the American Rescue Plan Act (ARPA).

Nearly 150 people participated in the call. From stimulus checks, to security grants, to money for yeshivas, Senator Schumer explained the details of each of the programs, stressing how important it is that these programs be known and utilized. The Majority Leader also committed to continue working to ensure that federal and state guidelines make the funds as accessible as possible to yeshivas, shuls and other community charities.

Ms. Christina Coughlin, Assistant Commissioner of the New York State Education Department, also joined the webinar to explain in detail what reimbursements and funds are available to nonpublic schools and yeshivas in New York State, and how the schools should proceed to get them. “We appreciate all the work that Assistant Commissioner Coughlin does for the yeshivos and other nonpublic schools on a regular basis and thank her for taking the time to address the schools and answer our questions,” said Rabbi Yehoshua Pinkus, director of Agudah’s Yeshiva Services.

Mr. Shlomo Werdiger, Chairman of Agudah’s Board of Trustees had warm words for the senator. “We thank Senator Schumer for taking time out of his busy schedule as Senate Majority Leader to join us and are extremely grateful to him for fighting for the interests of yeshivas and nonpublic schools, shuls and nonprofits.” Rabbi Chaim Dovid Zwiebel, Agudah’s Executive Vice President, who chaired the session, added, “What Senator Schumer did in moving this legislation forward and securing $2.75 billion dollars for non public schools was absolutely unprecedented and he deserves a world of credit.”