Siyumim for the Siyum

Siyumim for the Siyum 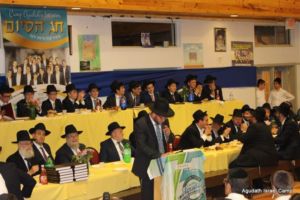 Camp seasons typically conclude with three exciting days of Color War during the final week. The few remaining days following that event are somewhat anticlimactic; it is hard to match the emotion and joy of the competition’s concluding event, the Grand Sing.

The past summer at Camp Agudah, the final days of camp were anything but anticlimactic. The very last night of camp, at the grand end-of-season banquet, staff members and masmidim joined together in a siyum haShas in memory of our beloved Mara D’Asra, Harav Chaim Yisroel Belsky zt”l.

At that siyum, Harav Elimelech Belsky shlita, who succeeded his father as Rosh HaMasmidim, explained that a summer is actually a siyum of the entire year. How one chooses to spend his summer is a measure of his attitude towards Torah and mitzvos all year long. Someone who, with his parents’ guidance and encouragement, spends his summer in Ruach Country is making a statement that Torah is geshmak, that learning Torah and being involved with mitzvos is something that he wants to do all year long.

This message was especially appropriate because of the special event that took place in the camp’s main dining room on the previous night, the last motzaei Shabbos of the camp season. Camp Agudah’s first ever Chag HaSiyum melava malka was held, at which 19 campers and staff members celebrated individual siyumim on various masechtos of Gemara and sedarim of Mishnayos. Parents and rebbeim of the mesyamim joined the camp family for this beautiful event which concluded with a lively rikud that lasted well past midnight.

What an inspiring sight it was to see 19 bachurim of various ages seated on an upper dais, beaming with joy over their great accomplishments in limud haTorah. And on the lower dais sat many of their parents and rebbeim whose faces shone with pride.

Each masyem was presented with a sefer as a gift from the camp, a token of appreciation for helping to add even more ruach to Ruach Country.

We are sure that as the summer quickly approaches, many campers and staff members are already preparing for the grand siyum of 5777 which hopefully, will surpass last year’s chag hasiyum.