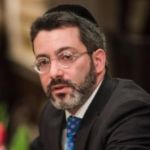 Thanks to its CEO, Rabbi Yitzchok Ehrman, Agudath Israel of Illinois enjoys a close relationship with the Chicago Parks District and has collaborated with the district in the past by serving kosher food at some of its programs. The Parks District recently hosted their annual Special Olympic games and invited Rabbi Ehrman and Agudath Israel of Illinois’ director of government affairs, Rabbi Shlomo Soroka  to a VIP reception at Soldier Field where they met Special Recreation Manager Gerry Henaghan. They discussed the challenge that while the Parks District runs a variety of recreational programs, such as aquatics and Special Olympics, Orthodox Jews with special needs are often unable to participate due to religious restrictions. The discussion led to a meeting on Thursday between Ms. Henaghan’s associate, Kristi Miller;  Rabbis Ehrman and Soroka; Abbie Weisberg, executive director of Keshet, an organization that has schools and programs for children and young adults with special needs;  Dr. Shana Erenberg, executive director of Libenu, an organization that focuses on independent living and housing for special needs individuals; and Mrs. Chasi Davis. The group identified areas of potential collaboration and discussed plans for launching a new pilot program.

Agudath Israel’s Parks District meeting was just one example of its advocacy on behalf of individuals with special needs. During Agudath Israel of Illinois recent mission to Springfield, one of the prominent guests to address the delegates was Dr. Kate Anderson Foley, Deputy Superintendent, Illinois State Board of Education. Abbie Weisberg used that opportunity to invite Dr. Foley to visit some of Keshet’s various locations and discuss issues that involve the state. Last week, Dr. Foley fulfilled her commitment and visited several Keshet sites including an elementary school in Northbrook, a high school program at Ida Crown Jewish Academy in Skokie, Keshet’s post high school transition program, and the Keshet Gadol program that provides jobs to young adults. The tour was led by Abbie Weisberg, along with Keshet’s director of education, Dr. Melinda Remaly, and Rabbi Soroka.

Following the tour in Northbrook, at a very productive roundtable discussion, the group discussed the different aspects of various program, the relationship with local school districts, and challenges with state regulations and government funding.

Dr. Foley expressed how impressed she was with the facilities, the quality and structure of the various programs, and the results they produce. But perhaps what impressed her most was the obvious love and dedication of Keshet’s staff and administration for each and every individual.  Mrs. Weisberg thanked Rabbi Soroka for his time, effort, and guidance. “You are truly an advocate, she said, “and I thank you for all that you and Agudath Israel does to assist with the continuity of Keshet’s programming.”