Statement of Agudath Israel of America Regarding the Trump Administration’s Framework to Achieve Peace between Israel and the Palestinians
Print 🖨 PDF 📄
Agudath Israel of America is deeply appreciative of the Trump Administration’s tireless efforts to bring peace and prosperity to both Israelis and Palestinians after the many decades of unrest and instability they have endured. Today’s announcement is the result of the President’s abiding dedication to those goals, and we welcome a peace proposal that we believe promises to lay a foundation for a meaningful path forward to the fulfillment of both Israeli and Palestinian aspirations.
There can be no peace without the recognition of Israel’s right to exist as a Jewish State. There can be no peace without the abandonment of terror and violence, and of those who perpetrate them. There can be no peace without defensible borders securing Israel against the threats it faces. For Palestinians who are prepared to take these steps to sincere peace, the framework offers hope for the fulfillment of their dreams of statehood, sovereignty and economic enrichment. Rejectionism, extremism or ignoring current realities and facts on the ground will never bring Palestinians what they strive for. This is an opportunity that neither Israelis nor Palestinians can afford to pass up.
This framework is exactly that — a framework. There are thousands of details to be worked out. There will be disagreements, perhaps bitter ones. The end result might look different in some significant ways. But that’s what a framework does. It provides the basis for negotiation. And that has always been our nation’s fundamental role and policy in the Middle East — to bring the parties to the conflict together for direct negotiations to iron out among themselves the differences that divide them. That is what this proposal does.
Ultimately, we turn to the Almighty, who is the maker of peace in heaven and earth. May He inspire those who have been at war for so long to have the courage to end the hostility that has brought so much suffering and bloodshed to their peoples and may He extend the Divine blessings of a true and lasting peace for generations to come.
January 28, 2020
A copy of the statement can be downloaded by clicking on the image below: 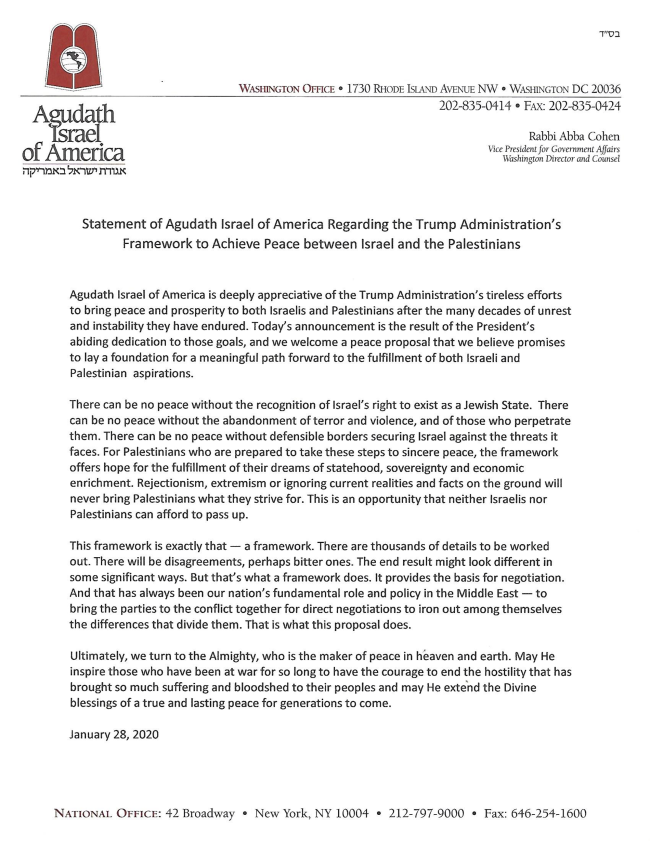