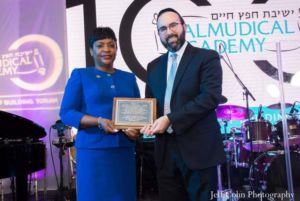 Agudath Israel of Maryland extends warm congratulations to Delegate Adrienne Jones on being elected and sworn-in as Speaker of Maryland’s House of Delegates. In a unanimous vote cast yesterday by her legislative peers, Speaker Jones made double-history by becoming the first woman and first African-American to be elected to the speaker position in Maryland. She now assumes the position left vacant by Speaker Michael Busch, who passed away last month in the waning days of the annual legislative session.

Rabbi Ariel Sadwin, executive director of Agudath Israel of Maryland, said, “For the last number of years we have worked closely with Delegate Jones in her role representing an important area of our community and as chair of the education and capital budget subcommittees on House Appropriations. We now look forward to working with Speaker Jones in her new role, and share our greatest wishes for success as she assumes this prestigious mantle of leadership.”