Greetings from Chicago where I am spending the weekend at our Midwest Convention together with community leaders from more than a dozen states.

January is a time of new beginnings and transitions in the political world. As newly-elected officials were sworn into Congress and many state legislatures this week, Agudath Israel leaders were on hand in Albany, New York; Columbus, Ohio; Lakewood, New Jersey ; and Washington, DC.

Although the swearing-in ceremonies and receptions include many photo ops, more importantly, they give our staff and lay leadership an opportunity to explain to their elected officials the priorities of the Orthodox community and Agudath Israel.

One priority for Agudath Israel is the upcoming Senate confirmation hearings beginning next week. I am honored to be attending the confirmation hearing for Education Secretary-designate Betsy DeVos on Wednesday as her guest. Agudath Israel has worked with Mrs. DeVos for many years advocating for school choice and thousands of families are benefiting thanks to those efforts.

Agudath Israel submitted a letter of support to the members of the committee in support of her nomination and urges you to please call your US Senator and ask them to publicly support the nomination of Mrs. DeVos, especially if they sit on the HELP (Health, Education, Labor, and Pensions) committee.

If you live in a state with a school choice program, let your senator know how you or your community benefited from the policies supported by Mrs. DeVos.

During the presidential campaign Donald Trump talked about a $20 billion school choice plan. To watch a panel discussion on the topic at Agudath Israel’s national convention go to http://wordpress-359075-1115478.cloudwaysapps.com/videoaudio-the-20-billion-question/.

I don’t know what the $20 billion will mean for our community, but the first step is to have an education secretary who cares about every child regardless of where they attend school. 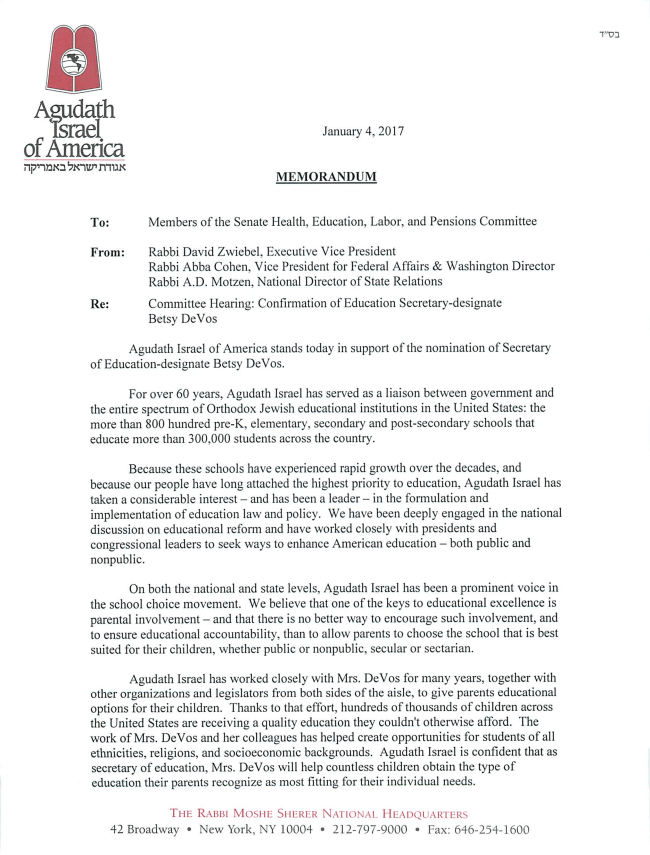