On Monday, Illinois State Treasurer Michael Frerichs came to visit the Orthodox Jewish community of Chicago. The visit, facilitated by Agudath Israel of Illinois’ director of government affairs, Rabbi Shlomo Soroka, started at Yeshiva Tiferes Tzvi (YTT). There, the treasurer, along with his assistant, former State Representative and City of Chicago Alderman Debra Graham, were greeted by Rabbi Soroka, Rabbi Yitzchok Ehrman, CEO of Agudath Israel of Illinois, and veteran Agudah activist, Mr. Moshe Davis. After meeting the school administration, they were given a tour of the school’s new building and its Keshet division which serves children with special needs. Treasurer Frerichs was especially moved by the interaction between the keshet students and their schoolmates in YTT.

A tour through the community included the West Rogers Park and Peterson Park neighborhoods, as well as parts of Lincolnwood and Skokie. He was shown many of the community schools, synagogues, community organizations, and residential neighborhoods. Upon observing the explosive growth of the Orthodox community and its infrastructure, Frerichs displayed keen interest in how Jewish education, from pre-kindergarten to kollel, plays such a central role in the growth and vibrancy of the observant community. He discussed how the state can play a role in making Illinois a more attractive destination for observant families. A full guided tour of Arie Crown Hebrew Day School (ACHDS) boys and girls divisions was led by school president, Jeremy Amster, principal Rabbi Eli Samber, and director of general studies, Mrs. Miriam Swann. Treasurer Frerichs observed classes and seemed to thoroughly enjoy interacting with students throughout the school. 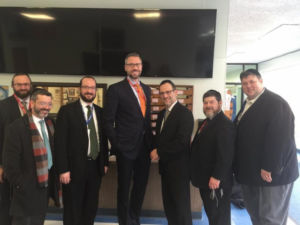 Following the tour, a discussion took place in the social hall of Congregation Agudath Israel of West Rogers Park. As the state’s chief investment officer, Frerichs has invested millions of state tax dollars in Israeli Bonds and plans on investing additional funds in Illinois-based Israeli technology companies. As such, community lay and business leaders, including those with venture capital companies that specialize in the technology sector, participated in the discussion. Longtime Jewish community leader and philanthropist Mr. Eric Rothner, who is also heavily invested in Israeli real estate projects, thanked the treasurer. In addition to meeting and learning about the community, the treasurer shared what his office has been doing, including creating programs to support higher education, returning unclaimed funds to their rightful owners, and explained how it could benefit communal organizations and individuals.

Treasurer Frerichs visited Israel this past year as a guest of the Jewish Federation of Metropolitan Chicago and has created a Jewish Advisory Council of which Rabbis Ehrman and Soroka are members.

In a letter to Rabbi Soroka following the visit, Frerichs expressed how much he enjoyed learning about the community and wrote, “I look forward to working together [with Agudath Israel] for years to come.” Rabbi Soroka commented, “We feel fortunate to have this important statewide office led by someone who has demonstrated a genuine desire learn about our unique community and carries out his duties with competence, compassion, and integrity.”

Did you know that one out of every four people in Illinois have unclaimed funds that the state is trying to return to them?  Look here to see if you, someone you know, or your organization has unclaimed funds.