When the vice chair of the Oklahoma Senate Education Committee recently compared a school choice bill to…Dr. Josef Mengele, Auschwitz’s “Angel of Death”(!), I was asked to comment. I am quoted here and here.

The fact that he said this when the Jewish community was still reeling from bomb threats and cemetery desecrations makes his comments even more shocking. Agudath Israel issued a statement on the troubling incidents and I had the opportunity yesterday to personally thank Vice President Pence for visiting the desecrated cemetery in St. Louis and for his condemnation of anti-Semitism. 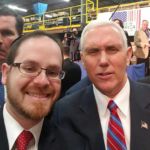 Vice President Pence was visiting the headquarters of Frame USA in greater Cincinnati and I was privileged to deliver a “frame-themed” invocation. Pence joked that Health Secretary Price’s introduction was the “second best speech he stood behind this week”. He was, of course, referring to President Trump’s joint address to Congress which we commended. 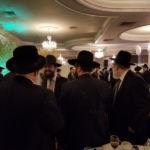 During his address, President Trump referenced Florida’s scholarship tax credit program, which has widespread support thanks to a coalition led by Step up for Students. The coalition includes Agudath Israel’s Florida director, Rabbi Moshe Matz who celebrated the wedding of his oldest daughter at the same time as President Trump’s speech. Mazel Tov!

Another mazal tov goes to our newest member of the team, Rabbi Yeruchim Silber, who will serve as the Director of New York Government Relations for Agudath Israel of America. To learn more about Rabbi Silber and to watch an interview discussing his new responsibilities and goals click here.

In our neighboring state of New Jersey, Rabbi Schnall was the final speaker at a contentious Jackson Township Council Meeting. The council was considering two ordinances which many Orthodox residents felt were targeting their community. One ordinance would prohibit dormitories in the entire township, while the second would prohibit the building of any school in a residential area. To read Rabbi Schnall’s powerful testimony click here. Hamodia’s report on the issue can be found here.

In Georgia, the House of Representatives passed a bill (HB 217) which would gradually increase the state’s scholarship tax credit program and it now heads to the Senate.

School choice was just one of the many issues our Maryland director was busy with this week in Annapolis.

Over the next few weeks, Agudath Israel will be traveling to DC, and several state capitals on leadership missions. Is it just a photo op? I shared my thoughts here.