The Siyum is just a little more than a year away and The Agudah is gearing up for the greatest Torah celebration in recent Jewsih history. Since Rav Meir Shapiro initiated the learning of Daf Yomi at the Agudah Knessiah Gedolah in Vienna in 1923, The Agudah has been at the forefront of expanding Torah learning through the Daf. Since the churban in Europe, there has been an exponential increase in Daf Yomi learners form Siyum to Siyum. It may be hard to imagine anything greater than the last ma’amd at MetLife Stadium in August of 2012, but, get ready, for The Siyum, the 13th Global Siyum Hashas of the Daf Yomi.

The Agudah strives to make Daf Yomi as accessible and relevant to as many Jews worldwide as possible. With the revolutionary Chavrei HaSiyum Initiative announced at this past Agudah Convention and the upcoming mobile app release, no stone is being left unturned. The Toras chaim will come alive.

Chullin, one of the most complex mesechtos for lomdei Daf Yomi, will be brought to life by Rabbi Amitay Bendavid, author of Sefer Sichas Chullin. Rabbi Bendavid, an acknowledged expert in the fields of shechitah and nikkur, has also, literally, written THE book on Chullin. His Sichas Chullin is required reading for anyone learning the mesechta. Chazal tell us eino domeh shemiya l’r’iyah; in his presentations, Rabbi Bendavid will be teaching halachic concepts and animal anatomy which are better understood off the page.

The series of presentations are dedicated in memory of Rav Yisroel Belsky zt”l, who dedicated his life to sharing his encyclopedic knowledge of Torah and science with a hands-on approach. He brought the most obscure sugyos to life for thousands of talmidim worldwide, and teaching Chullin was his special passion. Thousands of his talmidim in Torah Vada’as and at Camp Agudah fondly remember his clarity, breadth of knowledge, and – most of all – his hands-on method of teaching Torah. The Global Chullin Initiative aims to carry on his great legacy by bringing Chullin to hundreds of thousands of Jews around the world.

Rabbi Bendavid’s presentations will take place throughout the United States and Canada and beyond, with more details and a full schedule being released shortly. There will also be a livestream option available for people who are not able to attend a live event.

Rabbi Labish Becker, Executive Director, and one of the organizers of the initiative said, “This is an extraordinary opportunity for lomdei hadaf and others to truly experience and understand in a very practical way what chazal are telling us to do in Maseches Chullin. We wish to gratefully acknowledge the support of Meal Mart – an Alle Processing brand – for sponsoring this series, enabling tens of thousands of people nationwide to participate.” 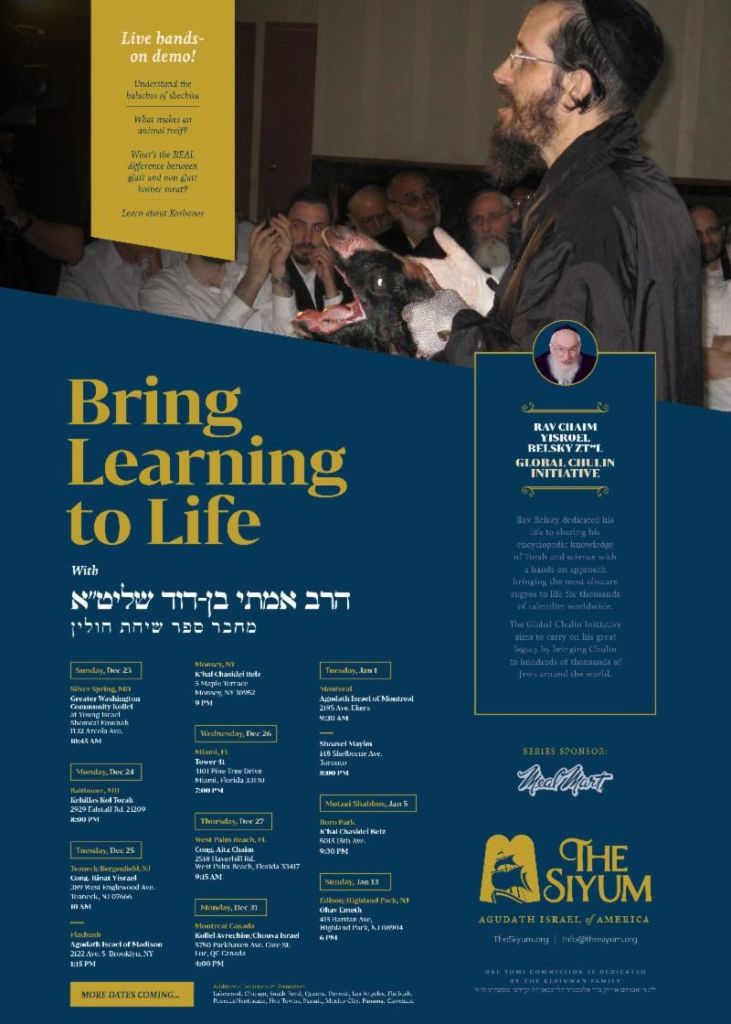