The stakes are higher

The stakes are higher

What a week for religious freedom!

While ostensibly about using recycled tires to resurface a playground, the U.S. Supreme Court ruling in Trinity Lutheran v. Comer will likely have major implications on other religious freedom cases. Monday’s ruling related to Missouri’s Blaine Amendment which prohibits governments from funding religious organizations, and as Justice Sotomayor wrote, “the stakes are higher.” Aside from our official statement (here) which was widely distributed, Rabbi Abba Cohen’s comments were featured in newspapers across the country and on a radio show.

“The Orthodox Jewish group Agudath Israel of America said the ruling could provide support for the argument that it would be discriminatory to not allow publicly funded tuition vouchers to be used for schooling at a religious institution.” AP

To read the full AP article (which was carried in the NYT and many major media outlets) click here.

The same week, the U.S. Supreme Court also sent a school voucher lawsuit back to Colorado’s Supreme Court in light of the Trinity decision and the Georgia Supreme Court ruled in favor of the state’s scholarship tax credit program, thereby preventing the plaintiffs from making a claim using that state’s Blaine language (our take here).

Religious freedom was also the subject of another court decision, this time in New Jersey (see here). Finally, I had the honor of participating in a policy forum hosted by the Cato Institute on the 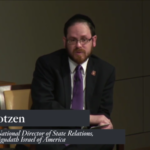 sensitive topic of discrimination in private schools and the balance between religious liberty and civil rights. (Click on here to watch the entire discussion).

Another sensitive and controversial topic was the decision by the Israeli government regarding the Western Wall. View our statement is here.

On the education front, Rabbi Frank provides us with an exciting update from Ohio. I had the pleasure of presenting Rabbi Frank with an award this week on behalf of Yeshiva Derech HaTorah. My presentation and his acceptance speech is available here and the honoree video is available below. Mazal tov on the well-deserved honor!

Unfortunately, New Jersey is facing a government shutdown (see action alert here regarding nonpublic school items in budget), while Illinois is once again trying to finalize a budget deal today to prevent a further downgrade of the state’s credit rating (Rabbi Soroka is working hard in Springfield on several important issues – hopefully more on that next week).

If you have time over the long weekend, I encourage you to to catch up on our webinar series on the Law of the Land. Our website now has all the webinars and materials, including a 280-page compliance guide for nonprofit organizations.