Use Caution in Drawing Conclusions from Ohio Voucher Study

Use Caution in Drawing Conclusions from Ohio Voucher Study

(This article appeared this week in the online blog of Education Next, a publication of the Hoover Institution) 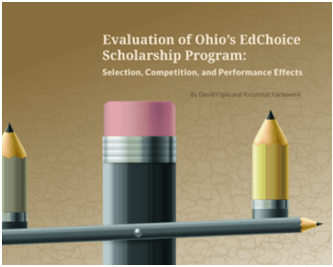 The Thomas B. Fordham Institute recently released a study on the academic impact of Ohio’s flagship school choice program authored by noted researcher Dr. David Figlio of Northwestern University. The report is noteworthy for its principal findings, namely that, not only is the sky not falling for impacted public schools, the EdChoice program has had a positive impact on the academic performance of public schools whose students are eligible for a scholarship. Surprisingly, the study also found that the students using scholarships to attend private schools who the report studied (more on that later) did not perform as well as their public school peers on the state test.

Matt Barnum of The 74 wrote an article that details some of the possible explanations for the latter finding. Based on my own experience in Ohio, I can attest that many nonpublic schools do not align their curriculum to the state test, nor do they focus much on these measures, and that is likely an important factor. However, it is important to note what the study could not address. As Dr. Figlio made clear in both his report and a presentation to The City Club, the study had significant limitations.

To read the rest of Rabbi Frank’s article go to EducationNext or view the pdf.