We lost our general.

We lost our general.
Print 🖨 PDF 📄

In his role as Rosh HaYeshiva (Dean) of Telshe Chicago for nearly 60 years, he was the beloved rebbi (teacher) of thousands of students. In his role as a member of Agudath Israel of America’s Council of Torah Sages, rabbinic leader of Agudath Israel of Illinois, and the chairman of Torah Umesorah’s rabbinic board, Rabbi Levin had an impact on hundreds of thousands of lives, young and old.

For many years, the Rosh HaYeshiva provided guidance to Agudath Israel’s government affairs division, led at the time by my predecessor Rabbi Yehiel Kalish, on an almost daily basis. He not only encouraged Rabbi Kalish to launch this weekly newsletter,  but the Rosh HaYeshiva would actually print it out and read it every Friday. He took pride in the growth of the Orthodox Jewish community, especially across the Midwest, and he was especially proud of Agudah’s role in encouraging and facilitating that growth.

Rabbi Levin often considered himself “a messenger,” on a lifelong mission. As the video above illustrates, he called himself “a soldier” for the Agudah. He said he was simply following orders from his Rosh HaYeshiva who had encouraged him to get involved with Agudath Israel while still a teenager. During the many hours of eulogies, several speakers used the Talmudic expression, “Woe to the ship that has lost its captain.” To us, he was our general. We miss him terribly. 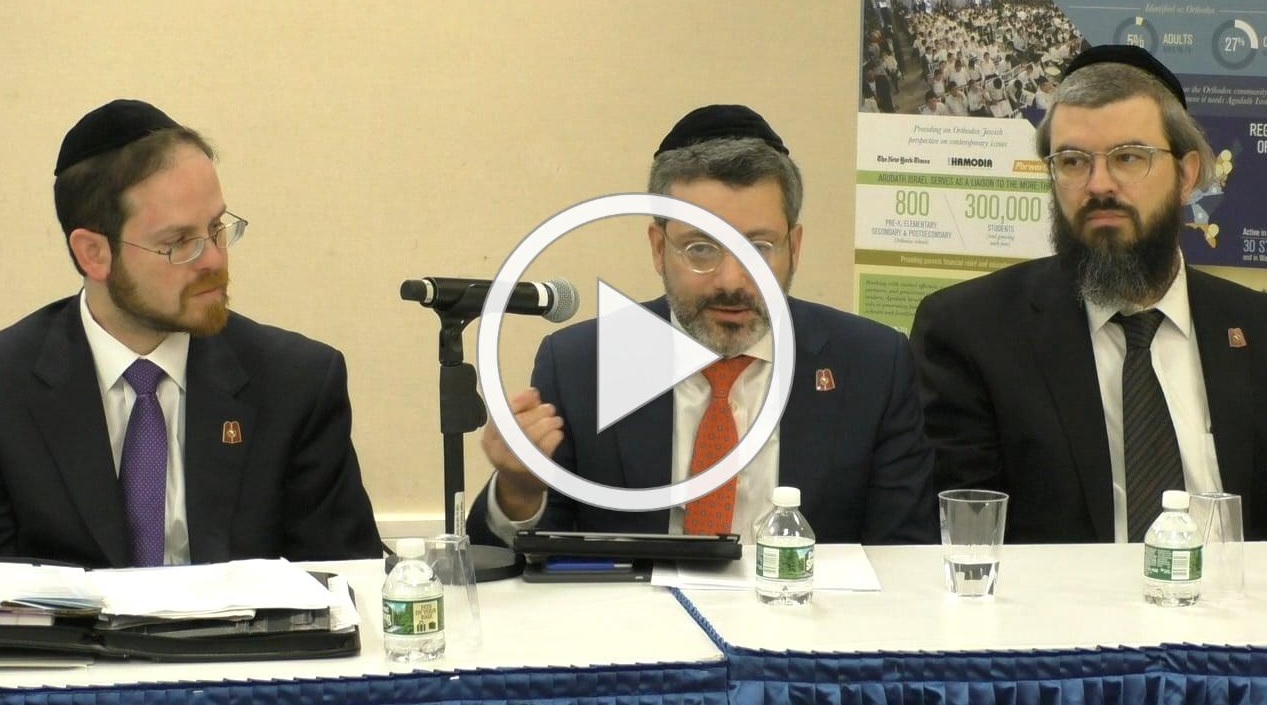 People often tell me that they would like to get more involved in advocacy, but they don’t know what to say or what to do. Earlier this week, I moderated an excellent presentation featuring my government affairs colleagues, titled “Advocacy Made Simple: How You Can Make a Difference.” The one-hour convention session covered voting, grassroots advocacy, school choice, Israel, contacting and meeting with elected officials, and ended with a funny skit about how NOT to meet with an elected official. Click on the image above to watch the entire session and please send me feedback on what you would like to see in future presentations.

As part of the “Moving Forward” theme of the convention, a video was shown featuring some of the more recent additions to the Agudah team. I encourage you to watch the video here.

To watch or listen to other Agudah convention sessions go to

To view photos from the convention, go to https://www.agudahconvention.org/photos

One of the participants in the advocacy session mentioned that he had not been aware of the extent of Agudah’s advocacy efforts on Israel issues before attending the session. Interestingly, the only state update we have this week is related to combating BDS and anti-Israel activity on campus see below.