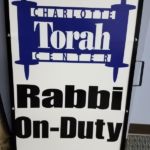 Greetings from North Carolina! While here, I joined Rabbi Chanoch Oppenheim of the Charlotte Torah Center for “prayer and politics” and had the opportunity to speak to his congregants about Agudath Israel and its activities.

Recently, the Forward referred to Agudath Israel as part of Washington’s “new Jewish elite” rising under President Trump. They highlighted the fact that our organization succeeded in “landing the first White House meeting among all Jewish groups,” as well as our being first to meet with Secretary of Education DeVos.  I’m not in the business of deciding who is or isn’t part of the elite, and I know we have had positive and productive relationships with many past Democratic and Republican administrations, but perhaps if they were writing their article today, they may have added that our man in DC, Rabbi Abba Cohen was invited to White House events on three consecutive days this week.

On Tuesday, Vice President Pence convened and spoke at the first-ever White House commemoration of Israel Independence Day, while on 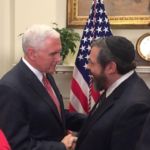 Wednesday, both President Trump and the Vice President spoke at a Roosevelt Room event celebrating the inclusion of school choice legislation in the omnibus spending bill. Finally, on Thursday, President Trump signed his Executive Order on religious freedom in the Rose Garden surrounded by faith leaders. All three of those events were attended by Rabbi Cohen.

While attending White House events is important, it is just a small example of how Rabbi Cohen is representing our community to the federal government. Click here for Rabbi Cohen’s recent statements on some of the issues facing Congress.

On Monday I had the honor of delivering an interactive invocation at a school choice rally in Columbus, Ohio. More than 1500 school choice supporters, including representatives from five Jewish schools, gathered in front of the Statehouse steps to celebrate their educational options and advocate for the passage of Senate Bill 85, which would make significant changes to Ohio’s voucher programs. It was great to see our Ohio director Rabbi Yitz Frank in action.

Meanwhile, in Maryland, thanks in large part to the advocacy effort led by Rabbi Ariel Sadwin, parents will once again be able to apply for a BOOST scholarship.

Finally, our Beren webinar series continues this Monday. To register or watch the first session click here. For a video recap of the New York State budget and how it affects our schools click here.