Yellow Scarves and Yarmulkas in Austin 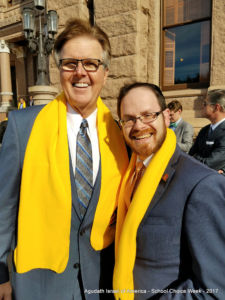 Orthodox Jewish students, teachers, and community leaders from Dallas, Houston, and Austin joined thousands of participants on the steps of the Texas State Capitol. Celebrating National School Week, the rally was an opportunity to celebrate all types of educational options including public, charter, private and homeschool. Lieutenant Governor Dan Patrick was among several elected officials who spoke at the rally and expressed his intention to pass school choice legislation out of the Senate again this legislative session and pushed the Speaker of the House Joe Strauss (who was on the stage) to at least allow it to come to a vote. Governor Greg Abbott publicly promised to sign a school choice bill if it did pass.

A scholarship program would fulfill the prayers of Rabbi Yisroel Katz of Torah Day School of Dallas who delivered the benediction. Quoting from Biblical sources, he stressed how each child is unique and every parent should have the ability to choose the educational setting that best meets the needs of his or her child. He then prayed that the elected officials should have the wisdom, kindness, and compassion to enact legislation helping all Texas children.

“We look forward to hopefully getting a school choice bill passed that will benefit the members of our community” said Rabbi Aryeh Feigenbaum, the Rabbi of Congregation Ohr Hatorah.

Rabbi Yisroel Katz giving the invocation at the event

Following the rally, many of the participants visited with their state representatives and senators to advocate for school choice and share their unique perspective. They advocated for school choice proposals like a scholarship tax credit program that was recently introduced and an education savings account (ESA) proposal supported by Lt. Governor Patrick and many prominent elected officials. An ESA is like a debit card that a parent can use for a variety of educational services including private school tuition and tutoring.

The rally, the largest school choice rally in many years, was organized by Texans for Education Opportunity with the cooperation of many co-sponsors, including Agudath Israel of America.

“As someone who, together with local community leaders, has been involved in the school choice effort in Texas for more than a decade,” said Agudath Israel of America’s national director of state relations Rabbi A. D. Motzen, “I was happy to hear that so many officials reiterated their commitment to finally enact a meaningful private school choice program. Texas parents have waited long enough.” 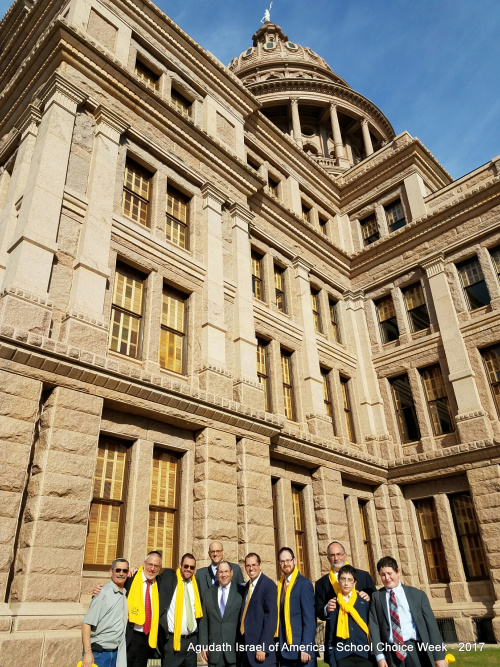 Group from Dallas in front of Texas Capitol